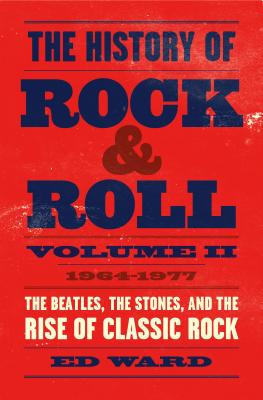 “This is a great, fun book by Ward, a correspondent for NPR's All Things Considered and one of the founders of the South by Southwest Conference and Festivals (SXSW). Covering the period of 1920 to 1963, almost every chapter in the book is devoted to a single year and the songs that were recorded and/or released during that year. This is a broad overview that substitutes breadth for depth but doesn't spare the entertainment factor. Ward's sweeping survey reads like the 400-plus page liner notes for a 1,000-song box set and, as a music nerd, that is one of the best compliments I can give!”
— Joe Turner (E), Book People Bookstore, Austin, TX

From rock and roll historian Ed Ward comes a comprehensive, authoritative, and enthralling cultural history of one of rock's most exciting eras.

It's February 1964 and The Beatles just landed in New York City, where the NYPD, swarms of fans, and a crowd of two hundred journalists await their first American press conference. It begins with the question on everyone's mind: "Are you going to get a haircut in America?" and ends with a reporter tugging Paul McCartney's hair in an attempt to remove his nonexistent wig. This is where The History of Rock & Roll, Volume 2 kicks off. Chronicling the years 1964 through the mid-1970s, this latest volume covers one of the most exciting eras of rock history, which saw a massive outpouring of popular and cutting-edge music.

Ward weaves together an unputdownable narrative told through colorful anecdotes and shares the behind-the-scenes stories of the megastars, the trailblazers, DJs, record executives, concert promoters, and producers who were at the forefront of this incredible period in music history. From Bob Dylan to Bill Graham, Jimi Hendrix, Janis Joplin, The Byrds, Aretha Franklin, The Rolling Stones, and more, everyone's favorite musicians of the era make an appearance in this sweeping history that reveals how the different players, sounds, and trends came together to create the music we all know and love today.

Ed Ward (1948-2021) was a renowned rock music critic for such publications as Crawdaddy, Rolling Stone, Creem, and The Austin American-Statesman. As NPR’s “Fresh Air” rock-and-roll historian for more than thirty years, Ward shared his musical knowledge of musicians and bands, both famous and obscure, to an audience of fourteen million listeners.

One of the founders of Austin’s South by Southwest (SXSW) music and film festivals, Ward’s books include The History of Rock & Roll, Volume One: 1920-1963, The History of Rock & Roll Volume Two, 1964-1977: The Beatles, the Stones, and the Rise of Classic Rock, and Michael Bloomfield: The Rise and Fall of an American Guitar Hero. From 2018-2020, he offered in-depth commentary about his rock history books as co-host of the Let It Roll podcast.

“Deeply researched, but conversational in tone. [Ward] nerds out just the right amount, moving briskly from hit to hit and craze to craze, slowing down only to impart a few choice anecdotes.” —The Washington Post

“A dean of rock journalism delivers the first volume of a magnum opus on a subject that never ceases to fascinate...turning up plenty of surprises and fresh insights. A spry study that should inspire listening with new, and newly informed, ears to old tunes.” —Kirkus Reviews, starred review

“Ward’s vivid anecdotes make the book more fun to read that 98 percent of tomes with ‘history’ in their title.” —Dallas Morning News

“A book like this is indispensable. Ward’s warm, welcoming voice allows him to both inform and entertain.” —Pittsburgh Post-Gazette