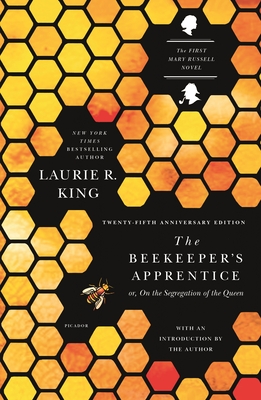 This is book number 1 in the A Mary Russell Mystery series.

The Twentieth-Anniversary Edition of the First Novel of the Acclaimed Mary Russell Series by Edgar Award–Winning Author Laurie R. King.

In 1915, Sherlock Holmes is retired and quietly engaged in the study of honeybees in Sussex when a young woman literally stumbles onto him on the Sussex Downs. Fifteen years old, gawky, egotistical, and recently orphaned, the young Mary Russell displays an intellect to impress even Sherlock Holmes. Under his reluctant tutelage, this very modern, twentieth-century woman proves a deft protégée and a fitting partner for the Victorian detective. They are soon called to Wales to help Scotland Yard find the kidnapped daughter of an American senator, a case of international significance with clues that dip deep into Holmes's past. Full of brilliant deduction, disguises, and danger, The Beekeeper's Apprentice, the first book of the Mary Russell–Sherlock Holmes mysteries, is "remarkably beguiling" (The Boston Globe).

Laurie R. King is the Edgar Award–winning author of the Kate Martinelli novels and the acclaimed Mary Russell-Sherlock Holmes mysteries, as well as a few stand-alone novels. The Beekeeper’s Apprentice, the first in her Mary Russell series, was nominated for an Agatha Award and was named one of the Century’s Best 100 Mysteries by the Independent Mystery Booksellers Association. A Monstrous Regiment of Women won the Nero Wolfe Award. She has degrees in theology, and besides writing she has also managed a coffee store and raised children, vegetables, and the occasional building. She lives in northern California.

“A fascinating and often moving account of a friendship so unusual and so compelling that one almost accepts it as being historically real.” —The Denver Post

“Enchanting...The Beekeeper's Apprentice is real Laurie R. King, not faux Conan Doyle, and for my money, it's better than the original.” —San Jose Mercury News