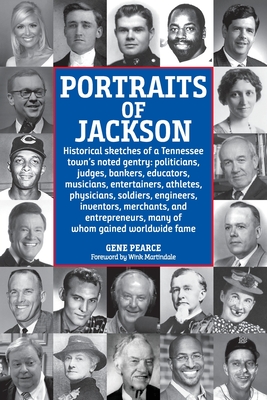 By Gene Pearce
$21.95
Available from our Warehouse (Not in store currently)
(This book cannot be returned)

Jackson, the eighth largest city in Tennessee, celebrates its 200th birthday in 2021. Portraits of Jackson tells the history of Jackson and Madison County with historical sketches of 370 men and women who were either born in Jackson, worked in Jackson, and/or brought notoriety and fame to themselves and the city. included are politicians, judges, bankers, educators, musicians, entertainers, athletes, physicians, soldiers, engineers, inventors, merchants, and entrepreneurs.