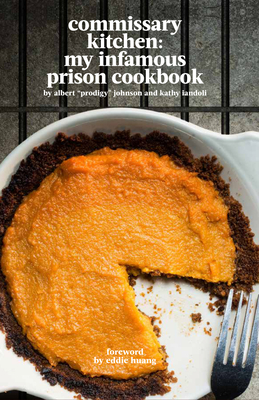 By Albert Prodigy Johnson, Kathy Iandoli, Eddie Huang (Foreword by)
$24.95
Available from our Warehouse (Not in store currently)

"Ultimately, these aren't recipes you're likely to try at home ― though they might be just the thing when your refrigerator is bare." ― NPR Books

Simple recipes for a complex world.

Here's what you get at the Commissary Kitchen:

And a lot more. In the Fall of 2016, rapper Prodigy released his Commissary Kitchen cookbook as a long-awaited addendum to his critically acclaimed 2011 memoir My Infamous Life: The Autobiography of Mobb Deep's Prodigy.

Originally, Prodigy's vision for Commissary Kitchen was to highlight the bare bones prison conditions to which inmates are subjected to and forcibly requiring a broad scope of ideas when it comes to the limited nutrition provided from food purchased within the commissary.

The conversation was taken to Harvard, MIT, and Yale, with televised appearances on NBC's The Tonight Show With Jimmy Fallon, TMZ, and a lengthy discussion with legendary radio personality Angie Martinez during the Barnes & Noble book launch, as well as a food truck at the renowned Smorgasburg.

In My Infamous Life, Prodigy detailed his mindset and need for self-reflection while imprisoned, but took it a step further with Commissary Kitchen by using recipes to tell the stories of life in prison, as he grappled with staying healthy as a quiet sufferer of the SS Type of Sickle Cell Anemia, by far the most fatal. Prodigy surrendered to the disease in 2017, though much like his music, his impact lives on forever.

As the world became entrenched in a global pandemic this book provides a glimpse of ways to survive under meager conditions. Once again Commissary Kitchen proves useful, as what was once a prison and college dormitory favorite can now be applied to most human lives in search of fun and moderately healthy recipes using well-preserved items like canned goods with simple appliances and utensils.

From omelets to black bean curry, simple sauces and reductions, there's plenty to pull from Commissary Kitchen as our current need is to stretch our food supply as far and most affordable as possible ―especially with escalating unemployment rates.

Prodigy's initial intent was to save lives, and here he's doing it again. Commissary Kitchen is much more than a fun gift book; it's an essential survival guide for these uncertain times. Rest In Peace, Prodigy.

Albert Prodigy Johnson: Albert "Prodigy" Johnson is a Multi-Platinum recording artist and member of the legendary Hip-Hop duo Mobb Deep. In 2006, Prodigy was arrested for gun possession and served a three-year prison term. In 2011, he released his first memoir, the critically acclaimed My Infamous Life. Since then, Prodigy has continued to release both solo projects and albums through Mobb Deep, touring worldwide. When he isn't touring, Prodigy is traveling the United States, lecturing at venues like MIT about the prison system and offering insight on changing the quality of inmates' lives. He is currently working on his follow-up memoir, The State Vs. Albert "Prodigy" Johnson.Kathy Iandoli: Kathy Iandoli is a critically acclaimed journalist and author. Her work has appeared in publications such as Pitchfork, VICE, Maxim, Cosmopolitan, The Village Voice, Rolling Stone, Billboard, and many others. She is also a professor of Music Business at New Jersey City University in Jersey City, New Jersey.Eddie Huang: Eddie Huang is the author of the NY Times Bestseller "Fresh Off the Boat". A sitcom based on the book, is airing on ABC. Huang is the host of Vice food show "Huang's World" and MTV's "Snack-Off". Huang's new book, Double Cup Love, will be published in May 2016.