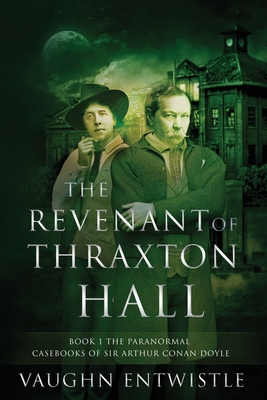 The Paranormal Casebooks of Sir Arthur Conan Doyle read like a volatile cocktail of Sherlock Holmes-meets-the-X-Files with a dash of horror and a whiff of London fog. Conan Doyle assumes the mantle of his fictional consulting detective and recruits a redoubtable Watson in the Irish playwright Oscar Wilde, who brings to the sleuthing duo a razor-keen mind, an effervescent wit, and an outrageous sense of fashion. Together, two of the greatest minds in Victorian England solve bizarre murders, unravel diabolical plots and unearth long-buried mysteries-each with a paranormal twist.

The Revenant of Thraxton Hall

"My murder will take place in a darkened's ance room-shot twice in the chest." The words are a premonition related to Arthur Conan Doyle when he answers a summons for help from a woman who identifies herself only as "a Spiritualist Medium of some renown." The house is a fashionable address in London. The woman's voice is young, cultured and ethereal. But even with his Holmesian powers of observation, Conan Doyle can only guess at her true identity, for the interview takes place in total darkness. Suspicious of being drawn into a web of charlatanism, the author is initially reluctant. However, the mystery deepens when he returns the next day and finds the residence abandoned.

1893 is a tumultuous year in the life of the 34-year old Conan Doyle: his alcoholic father dies in an insane asylum, his wife is diagnosed with galloping consumption, and his most famous literary creation, Sherlock Holmes, is killed off in The Adventure of the Final Problem. It is a move that backfires, making the author the most hated man in England. But despite the fact that his personal life is in turmoil, the lure of an intrigue proves irresistible. Conan Doyle assumes the mantle of his fictional consulting detective and recruits a redoubtable Watson in the Irish playwright, Oscar Wilde, who brings to the sleuthing duo a razor-keen mind, an effervescent wit, and an outrageous sense of fashion.

"The game is a afoot" as the two friends board a steam train for Northern England to attend the first meeting of the Society for Psychical Research, held at the mysterious medium's ancestral home of Thraxton Hall-a brooding Gothic pile swarmed by ghosts. Here, they encounter an eccentric m lange of seers, scientists, psychics and skeptics-each with an inflated ego and a motive for murder. As the night of the fateful's ance draws near, the two writers find themselves entangled in a Gordian Knot that would confound even the powers of a Sherlock Holmes to unravel-how to solve a murder before it is committed."