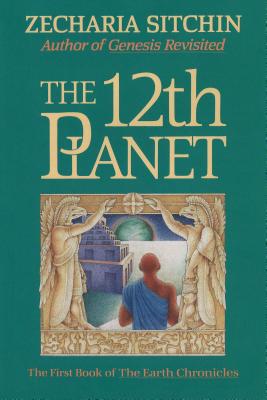 This is book number 1 in the Earth Chronicles series.

Over the years, startling evidence has been unearthed, challenging established notions of the origins of Earth and life on it and suggesting the existence of a superior race of beings who once inhabited our world. The product of thirty years of intensive research, The 12th Planet is the first book in Zecharia Sitchin's prophetic Earth Chronicles series--a revolutionary body of work that offers indisputable documentary proof of humanity's extraterrestrial forefathers. Travelers from the stars, they arrived eons ago, and planted the genetic seed that would ultimately blossom into a remarkable species...called Man.

The 12th Planet brings to life the Sumerian civilization, presenting millennia-old evidence of the existence of Nibiru, the home planet of the Anunnaki and of the landings of the Anunnaki on Earth every 3,600 years, and reveals a complete history of the solar system as told by these early visitors from another planet.

Zecharia Sitchin's Earth Chronicles series, with millions of copies sold worldwide, deal with the history and prehistory of Earth and humankind. Each book in the series is based upon information written on clay tablets by the ancient civilizations of the Near East. The series is offered here, for the first time, in highly readable, hardbound collector's editions with enhanced maps and diagrams.

Zecharia Sitchin (1920-2010), an eminent Orientalist and biblical scholar, was born in Russia and grew up in Palestine, where he acquired a profound knowledge of modern and ancient Hebrew, other Semitic and European languages, the Old Testament, and the history and archaeology of the Near East. A graduate of the University of London with a degree in economic history, he worked as a journalist and editor in Israel for many years prior to undertaking his life’s work--The Earth Chronicles.

One of the few scholars able to read the clay tablets and interpret ancient Sumerian and Akkadian, Sitchin based The Earth Chronicles series on the texts and pictorial evidence recorded by the ancient civilizations of the Near East. His books have been widely translated, reprinted in paperback editions, converted to Braille for the blind, and featured on radio and television programs.

"One of the most important books on Earth's roots ever written."
— East West Journal

"Sitchin is a zealous investigator into man's origins . . . a dazzling performance."
— Kirkus Reviews

"Sitchin's works are outstandingly different from all others that present this central theme. His linguistic skills in the languages of antiquity and his pursuit of the earliest available texts and artifacts make possible the wealth of photographs and line drawings appearing in his books from tablets, monuments, murals, pottery, and seals."
— Rosemary Decker, historian and researcher

"Read this book to see from a perspective not often offered. Read it to expand your picture of our tiny existence. And beyond that, just enjoy the theorizing and information provided. There are few places that you can find such a compilation."
— News Worth World in Perspective, Oct 2007

" . . . an array of evidence to support the assertion that the earth had been visited by ancient alien astronauts in its past. Sitchin based his conclusions on the written records of Sumer, the "sudden civilization" that sprang up virtually overnight in the Tigris-Euphrates Valley of modern Iraq."
— American Buddhist Journal, Feb 2009

" . . . [supplies] an array of evidence to support the assertion that the earth had been visited by ancient alien astronauts in its past. Sitchin based his conclusions on the written records of Sumer, the 'sudden civilization' that sprang up virtually overnight in the Tigris-Euphrates Valley of modern Iraq. . . . he found an astonishing array of facts that could be corroborated by modern research. What he found was literally mind boggling in 1976, and it remains so today."
— Wisdom Quarterly: American Buddhist Journal, Feb 2009

“Exciting . . . credible . . . most provocative and compelling. The 12th Planet presents documentation for a radical new theory which, by answering some age-old questions, merely widens the ripples in the pool. (As the author notes, “If the Nefilim . . . created Man on Earth, who created the Nefilim?”)
— Library Journal

“For thousands of years priests, poets, and scientists have tried to explain how man was created. . . . Now a recognized scholar has come forth with a theory that is the most astonishing of all.”
— United Press International