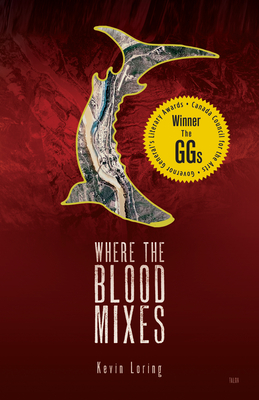 Where the Blood Mixes is meant to expose the shadows below the surface of the author's First Nations heritage, and to celebrate its survivors. Though torn down years ago, the memories of their Residential School still live deep inside the hearts of those who spent their childhoods there. For some, like Floyd, the legacy of that trauma has been passed down through families for generations. But what is the greater story, what lies untold beneath Floyd's alcoholism, under the pain and isolation of the play's main character? Loring's title was inspired by the mistranslation of the N'lakap'mux (Thompson) place name Kumsheen. For years, it was believed to mean "the place where the rivers meet"--the confluence of the muddy Fraser and the brilliant blue Thompson Rivers. A more accurate translation is: "the place inside the heart where the blood mixes." But Kumsheen also refers to a story: Coyote was disemboweled there, along a great cliff in an epic battle with a giant shape-shifting being that could transform the world with its powers--to this day his intestines can still be seen strewn along the granite walls. In his rage the transformer tore Coyote apart and scattered his body across the nation, his heart landing in the place where the rivers meet. Floyd is a man who has lost everyone he holds most dear. Now after more than two decades, his daughter Christine returns home to confront her father. Set during the salmon run, Where the Blood Mixes takes us to the bottom of the river, to the heart of a People. In 2009 Where the Blood Mixes won the Jessie Richardson Award for Outstanding Original Script; the Sydney J. Risk Prize for Outstanding Original Script by an Emerging Playwright; and most recently the Governor General's Literary Award for Drama.

Kevin Loring is a member of the Nlakapmux (Thompson) First Nation in Lytton, British Columbia. As an actor he has performed in numerous plays across Canada, including Marie Clements' Burning Vision and Copper Thunderbird, and most recently in the Canada National Arts Centre's 40th anniversary production of George Ryga's The Ecstasy of Rita Joe. He also starred in the 2007 feature film Pathfinder, and co-produced and co-hosted the documentary Canyon War: The Untold Story about the 1858 Fraser Canyon War. He was the recipient of the 2005 Vancouver Arts Award for Emerging Theatre Artist, Artist in Residence at The Playhouse Theatre Company in 2006, and is currently Playwright in Residence at the National Arts Centre. His first play Where the Blood Mixes, won the Jessie Richardson Award for Outstanding Original Script; the Sydney J. Risk Prize for Outstanding Original Script by an Emerging Playwright; and most recently the 2009 Governor General's Literary Award for Drama. Where the Blood Mixes premiered at the 2008 Luminato Festival in Toronto. Presented at the 2008 Magnetic North Festival in Vancouver, it opened on the day of the House of Commons' apology for the legacy of suffering generations of aboriginal people continue to endure as a result of their experiences at residential schools. A remount of this production, in association with the playwright's own company, The Savage Society, is scheduled for a national tour as part of the 2010 Cultural Olympiad. Kevin Loring participated in the closing ceremonies of the Aboriginal Pavilion at the 2010 Winter Olympics.

For a first-time playwright, Kevin Loring is making quite a splash.”
Georgia Straight

Where the Blood Mixes was the best of a stream of plays tackling [the Residential Schools’] disastrous legacy.”
Globe & Mail

What a joy to witness a genuinely great piece of theatre about our nation’s dark secret and the terrible consequences of trying to poison the well of aboriginal spirit, being, culture and ritual.”
Vancouver Sun

Where the Blood Mixes goes straight to the heart. But it goes there via the funny bone.”
Vancouver Courier

Kevin Loring illuminates the complex aftermath of the residential school system and the circumstances of contemporary Aboriginal history through compelling, sympathetic and humorous characters who live as best they can, with courage and strength.”
Canada Council

There’s no denying the wit and emotional impact of Where the Blood Mixes. Again and again, Loring creates profoundly moving moments, and then wraps them in reassuringly earthy humour.”
Georgia Straight