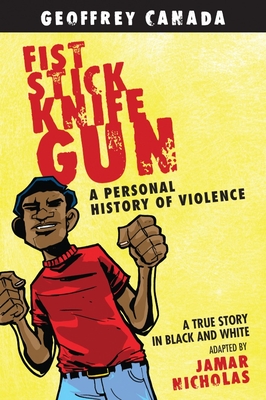 By Geoffrey Canada, Jamar Nicholas (Illustrator)
$15.00
Available from our Warehouse (Not in store currently)

Long before President Barack Obama praised his work as “an all-encompassing, all-hands-on-deck anti-poverty effort that is literally saving a generation of children,” and First Lady Michelle Obama called him “one of my heroes,” Geoffrey Canada was a small and scared boy growing up in the South Bronx. His childhood world was one where “sidewalk boys” learned the codes of the block and were ranked through the rituals of fist, stick, knife, and, finally, gun. In a stunning pairing, acclaimed comics creator Jamar Nicholas presents Canada’s raw and riveting account, one of the most authentic and important true stories of urban violence ever told.

Geoffrey Canada is the president and CEO of Harlem Children’s Zone, a nonprofit, community-based organization deemed “one of the most ambitious social experiments of our time” by the New York Times Magazine. Jonathan Kozol called him “one of the few authentic heroes of New York and one of the best friends children have, or ever will have, in our nation,” and Oprah Winfrey simply refers to him as “an angel from God.” Canada is featured in Davis Guggenheim’s documentary Waiting for “Superman”.

Jamar Nicholas is a Philadelphia-based artist and educator who has dedicated his career to empowering young people. Pulitzer Prize–winning editorial cartoonist Signe Wilkinson said about his work: “Nicholas has his pen on the pulse of everything worth watching.”

“Geoffrey Canada’s realistic yet hopeful voice finds fresh expression through the comic style of Jamar Nicholas. Canada’s account of his childhood and the role that violence played in shaping his experiences provides hard-won and crucial lessons.”
—Pedro A. Noguera, Peter L. Agnew Professor of Education at New York University

“Jamar Nicholas is a master of his craft—his drawings are full of life and truly stunning.”
—Bryan Lee O'Malley, creator of Scott Pilgrim vs. The World

“I wish every city had a Geoffrey Canada.”
—President Bill Clinton

“It's a no-brainer, buy one for yourself and one to put in the hands of a young man who may benefit from it as well. The life you save may be your own.”
- BlackSuperHero blog

“This is exactly the sort of broadly appealing and gripping nonfiction graphic novel that librarians need to be adding to their shelves.”
- Publisher's Weekly