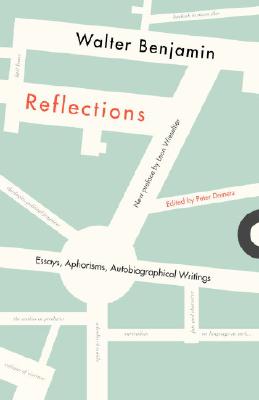 A companion volume to Illuminations, the first collection of Walter Benjamin's writings, Reflections presents a further sampling of his wide-ranging work. Here Benjamin evolves a theory of language as the medium of all creation, discusses theater and surrealism, reminisces about Berlin in the 1920s, recalls conversations with Bertolt Brecht, and provides travelogues of various cities, including Moscow under Stalin. He moves seamlessly from literary criticism to autobiography to philosophical-theological speculations, cementing his reputation as one of the greatest and most versatile writers of the twentieth century. Also included is a new preface by Leon Wieseltier that explores Benjamin's continued relevance for our times.

Walter Benjamin is recognized as one of the most acute analysts of literary and sociological phenomenon of the nineteenth and twentieth centuries. He died in 1940.

"There has been no more original, no more serious critic and reader in our time."
--George Steiner

"Benjamin is a legitimate ancestor of much that for the moment is most alive in criticism."
--The Nation

"This book is just that: reflections of a highly polished mind that uncannily approximate the century's fragments of shattered traditions." - Time