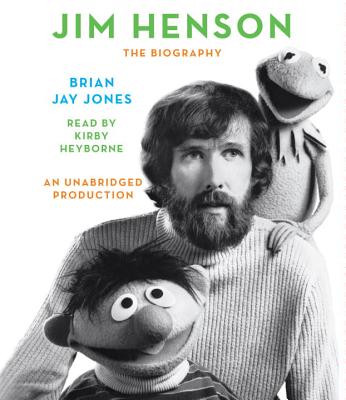 NATIONAL BESTSELLER NAMED ONE OF THE BEST BOOKS OF THE YEAR BY "BOOKPAGE"
For the first time ever a comprehensive biography of one of the twentieth century's most innovative creative artists: the incomparable, irreplaceable Jim Henson
He was a gentle dreamer whose genial bearded visage was recognized around the world, but most people got to know him only through the iconic characters born of his fertile imagination: Kermit the Frog, Bert and Ernie, Miss Piggy, Big Bird. The Muppets made Jim Henson a household name, but they were just part of his remarkable story.
This extraordinary biography written with the generous cooperation of the Henson family covers the full arc of Henson's all-too-brief life: from his childhood in Leland, Mississippi, through the years of burgeoning fame in America, to the decade of international celebrity that preceded his untimely death at age fifty-three. Drawing on hundreds of hours of new interviews with Henson's family, friends, and closest collaborators, as well as unprecedented access to private family and company archives, Brian Jay Jones explores the creation of the Muppets, Henson's contributions to "Sesame Street "and" Saturday Night Live, "and his nearly ten-year campaign to bring "The Muppet Show" to television. Jones provides the imaginative context for Henson's non-Muppet projects, including the richly imagined worlds of "The Dark Crystal "and" Labyrinth" as well as fascinating misfires like Henson's dream of opening an inflatable psychedelic nightclub.
An uncommonly intimate portrait, "Jim Henson" captures all the facets of this American original: the master craftsman who revolutionized the presentation of puppets on television, the savvy businessman whose dealmaking prowess won him a reputation as the new Walt Disney, and the creative team leader whose collaborative ethos earned him the undying loyalty of everyone who worked for him. Here also is insight into Henson's intensely private personal life: his Christian Science upbringing, his love of fast cars and expensive art, and his weakness for women. Though an optimist by nature, Henson was haunted by the notion that he would not have time to do all the things he wanted to do in life a fear that his heartbreaking final hours would prove all too well founded.
An up-close look at the charmed life of a legend, "Jim Henson" gives the full measure to a man whose joyful genius transcended age, language, geography, and culture and continues to beguile audiences worldwide.
Praise for "Jim Henson"
"Jim Henson" vibrantly delves into the magnificent man and his Muppet methods: It's an absolute must-read Neil Patrick Harris
An exhaustive work that is never exhausting, a credit both to Jones's brisk style and to Henson's exceptional life. "The" "New York Times"
""
A] sweeping portrait that is a mix of humor, mirth and poignancy. " Washington Independent Review of Books"
A meticulously researched tome chock-full of gems about the Muppets and the most thorough portrait of their creator ever crafted. Associated Press
Jim was one of my closest friends. And yet I found out things about him in "Jim Henson" that were new to me. Brian Jay Jones has captured the layers of Jim's genius and humanity, as well as the flaws that made Jim, like all of us, so delightfully imperfect. I thank Brian for giving Jim life again. This book has captured the spirit of Jim Henson. Frank Oz

"From the Hardcover edition.

Brian Jay Jones is an award-winning writer and biographer and presently serves as vice president of Biographers International Organization, the world s largest organization of practicing biographers. Jones is a devoted member of the Jim Henson generation, having been two years old when "Sesame Street "premiered in 1969 and nine when "The Muppet Show "debuted in 1976. A former policy analyst and advisor in the U.S. Senate, Jones abandoned politics for the pen in 2008, with the publication of his award-winning biography, "Washington Irving." He lives with his wife and daughter in Damascus, Maryland. His favorite Muppet is Rowlf (thanks for asking)."

“Illuminating . . . As Jones expertly shows, Henson remained throughout his life an artist who was continuously in motion, conceiving, pitching, and managing multiple projects at once.”—The Atlantic

“This is a biography that earns the label definitive.”—The Dallas Morning News

“In his new biography, Brian Jay Jones tells the story of how Henson turned a quaint art form into an entertainment empire. . . . The result is an exhaustive work that is never exhausting, a credit both to Jones’s brisk style and to Henson’s exceptional life.”—The New York Times

“An insightful look at the gentle artist.”—Parade

“If ever you had a single question about the felt magic Jim Henson managed to create, chances are Brian Jay Jones’ sweeping new biography of the puppeteer will answer it. . . . Jones offers a meticulously researched tome chock-full of gems about the Muppets and the most thorough portrait of their creator ever crafted. . . . It is a better world with the Muppets. And we are better off with this careful account of their master.”—Associated Press

“Compulsively readable . . . evocative . . . Much has been written about Henson—during his life and after—but nothing with the same sense of authority and access as Jim Henson: The Biography.”—The A.V. Club

“There are so many enjoyable aspects to this book that it’s hard to know where to start. . . . Jim Henson: The Biography is a fantastic story of a brilliant life cut short, but it can also be read as a blueprint for following your bliss.”—BookPage

“Brian Jay Jones draws upon new interviews with family and friends, reams of archival material, and Henson’s own journals to provide a nuanced study of a preternaturally gifted, relentlessly driven artist. . . . Jones does a superlative job organizing a massive amount of information.”—Los Angeles Review of Books

“Jim Henson: The Biography feels comprehensive without bogging down; it will keep readers turning pages and enjoying every scene from Henson’s life.”—Shelf Awareness

“A heartwarming, endearing, and joyful study . . . [Jones] gives us a real Jim Henson, not a saint to be sure, but a man who devoted his creative genius to making the world a better place. . . . In many places it seems that Henson is doing the talking right off the pages.  This book is fast-paced like his life, zany like his characters, full of fun and laughter. . . . It is all here in this sweeping portrait that is a mix of humor, mirth and poignancy.”—Washington Independent Review of Books

“Sure to be savored for its exhaustive look at the late Muppet-master.”—Variety

“Masterful . . . Jones continually shows that Henson left the world a better place, which serves as the book's theme. . . . [Jim Henson] can be enjoyed by readers of more than one generation.”—Kirkus Reviews

“The story of the innovative puppeteer’s life that Muppets completists have been waiting for . . . The section on Henson’s death and funeral is one of the best parts of the book—moving and elegiac. I dare you not to cry.”—Hollywood Reporter

“I worked with Jim for more than thirty years. He was one of my closest friends. And yet I found out things about him in Jim Henson that were new to me. Brian Jay Jones has captured the layers of Jim’s genius and humanity, as well as the flaws that made Jim, like all of us, so delightfully imperfect. Jim needed this book to be written. I thank Brian for giving Jim life again. This book has captured the spirit of Jim Henson.”—Frank Oz

“Brings to light a spirit of love, warmth, wit, and so much more.”—Library Journal

“The book’s most engrossing passages explore the extraordinary technical demands of creating naturalistic puppet spectacles in the age before computer graphics: ‘performing’ a Muppet was an intricate, almost contortionistic dance of two puppeteers crammed into a single sleeve. . . . A fascinating making-of documentary.”—Publishers Weekly

“I loved it. Brian Jay Jones vividly portrays Jim’s journey, and also the intersecting journeys of his colleagues and friends. In spite of the fact that Jim and I worked together closely for many years, there were compartments of Jim’s life that I hadn’t known about before. I was completely involved and couldn’t put the book down. A tremendous job.”—Dave Goelz, Muppet performer (Gonzo, Boober Fraggle, Bunsen Honeydew)

“This is not only a superb biography for the Jim Henson and Muppet fans but also a sensitively written portrayal of a great and unique human being that will fascinate any and all readers.”—Fran Brill, actress, Sesame Street performer

“Brian Jay Jones, in this marvelous tale of struggle and triumph, tells us how and why Jim Henson and his Muppets have rightly assumed their places in the pantheon of American creative geniuses alongside Walt Disney and Mickey, and Dr. Seuss and the Cat in the Hat.”—Paul Reid, co-author of The Last Lion: Winston Spencer Churchill—Defender of the Realm

“Every Muppet fan has wondered who was behind the wide-mouthed, bug-eyed, furry creatures. Before now all we had was a credit line: Jim Henson. Now, with Brian Jay Jones’s riveting Jim Henson, we have a nuanced portrait of the puppeteer—part genius inspired by his Mississippi Delta roots and his Christian Science faith, part flawed human with tastes too rich in everything from his art and cars to his women—that brings new understanding of and empathy for an icon of American popular culture.”—Larry Tye, author of Satchel and Superman