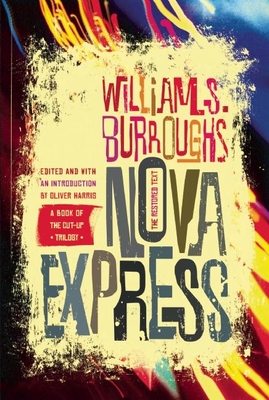 The most ferociously political and prophetic book of Burroughs's cut-up trilogy, Nova Express fires the reader into a textual outer space the better to see our burning planet and the operations of the Nova Mob in all their ugliness. As the new edition demonstrates, the shortest of the three books was cut by Burroughs from an extraordinary wealth of typescripts to create a visionary demand to take back the world that has been stolen from us. Edited from the original manuscripts by renowned Burroughs scholar Oliver Harris, this revised edition incorporates an introduction and appendices of never before seen materials.

William S. Burroughs (1914-1997) was the author of numerous novels, including "Junky," "Queer""Naked Lunch," "Nova Express," "The Ticket That Exploded," "The Soft Machine," and "The Wild Boys." He is considered one of the twentieth century's most radical, innovative, and influential writers, and a founding member of the Beat Generation.

A sermon blast of language. . . . Burroughs is the Martin Luther of hipsterism, welding his decree on the silicon doors of the solar system.”Newsweek

Burroughs is first and foremost a poet. His attunement to contemporary language is probably unequalled in American writing. Anyone with a feeling for English phrase at its most balanced, concise, and arresting, cannot fail to see this excellence.”Terry Southern

Burroughs writes with a beauty and efficiency unmatched by any living writer.”Chicago Sun-Times