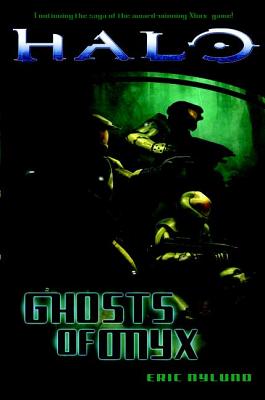 By Eric Nylund
Out of Print

This is book number 4 in the Halo series.

Continuing the saga of the award-winning Xbox™ game!

The Spartan-II program has gone public. Tales of super-soldiers fending off thousands of Covenant attacks have become the stuff of legend.
But just how many Spartans are left?
While the Master Chief defends a besieged Earth, and the myriad factions of the Covenant continue their crusade to eliminate humanity, an ultrasecret cell of the Office of Naval Intelligence known as "Section Three" devises a plan to buy the UNSC vital time. They're going to need hundreds of willing soldiers, though . . . and one more Spartan to get the job done.
The planet Onyx is virtually abandoned and the perfect place to set this new plan in motion. But when the Master Chief destroys Halo, something is triggered deep within Onyx: Ancient Forerunner technology stirs, and fleets of UNSC and Covenant race to claim it to change the course of the Human-Covenant War.
But this reawakened and ancient force may have plans of its own . . .

This novel is based on a mature-rated game.

Microsoft, the Microsoft Game Studios Logo, Bungie, the Bungie Logo, Halo, the Halo logo, Xbox, and the Xbox logos are either registered trademarks or trademarks of Microsoft Corporation in the United States and/or other countries and are used under license from owner.

Eric Nylund is the author of Halo: The Fall of Reach, Halo: First Strike, and Halo: Ghosts of Onyx, as well as the epic mythology series beginning with Mortal Coils and All That Lives Must Die, and The Resisters series for middle-grade readers. Born in the Los Angeles area, Nylund grew up in the mountains and pine forests of Truckee, California, and the Joshua trees and rattlesnakes of the Mojave Desert. He earned degrees in chemistry at U.C. Santa Barbara and U.C. San Diego before leaving his Ph.D. program to become a writer. Besides writing his novels, he is the Director of Narrative Design at Microsoft Game Studios. He lives near Seattle on a rain-drenched mountain with his wife, Syne Mitchell, and their son.