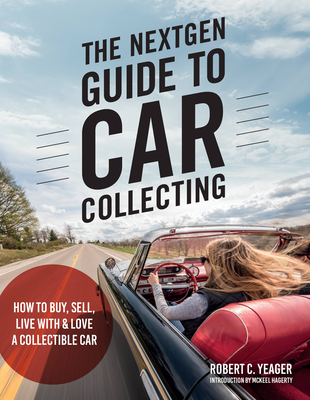 Satisfy your dream collector-car desires with this one-stop reference for starting or expanding your collection beyond traditional classics and muscle cars.

Focusing on the interests and needs of Generation X and Millennial car collectors, The NextGen Guide to Car Collecting offers a concise history of car collecting to present day, guidance on car buying and living the car-collector life, and an overview of collector cars with a focus on cars built from the 1970s through the 1990s while also touching on more contemporary cars. Chapters highlight Japanese, American, and European cars, particularly those models that have experienced the greatest growth in collector interest over the past decade.

The NextGen Guide to Car Collecting explores the many ways the Internet and social media have changed the classic car marketplace. You’ll learn how to buy a classic car online without suffering buyer’s remorse, as well as the four critical keys to a happy collector-vehicle relationship: 1) possessing discretionary cash for the initial purchase; 2) obtaining a thorough knowledge of the car and its ownership; 3) the critical pre-purchase inspection; and 4) access to a work space.

You’ll also find out why the popularity of late twentieth-century specialty cars will continue to grow (think increasing electronic complication and the still-large number of enthusiasts for whom “self-driving” means driving themselves) and explore the attributes that makes these cars desirable collector vehicles.

In addition, the book looks at the significant increases in quality and reliability of post-1970s machines and how that impacts their collectibility. Finally, learn why expectations that your newfound classic could outlast our current crop of lithium-ion-dependent electric cars may not be unrealistic: recent developments like ride-hailing and sharing services; expanded public transit; rental bikes and scooters; and garage condos and other storage options could actually extend the life of your “new” classic permitting you to truly tailor the use of your classics.

Whether your collection requires a one-stall garage or a pole barn, the practical, useful information and keen perspective of The NextGen Guide to Car Collecting will ensure you pull this volume from your shelf time and again.

Robert C. Yeager‘s love for cars began as a 16-year-old high schooler when he purchased a “raked,” baby-blue 1940 Ford two-door coupe for $250. Other cars of his youth included a 1948 Cadillac 7-passenger sedan and, in college, a red 1957 Studebaker Silver Hawk. As an adult, Yeager has owned a series of award-winning vintage Alfa Romeos. His current “fun” cars include an all-original 1972 Mercedes Benz 450 SL—recently awarded a Silver Star Preservation Award by the Mercedes Benz Club of America—and a 1996 Lexus SC 300.

For the past decade-plus, Yeager has written about collectible cars for the New York Times. Other previously published credits include Readers Digest; Family Circle; Woman’s Day; Encyclopedia Britannica; and others. His byline has also appeared in the Chicago Tribune, New Orleans Times-Picayune, and the New York Times Service.

In 2013, Yeager’s novel, The Romanov Stone, won an Independent Publisher’s “Ippy” for suspense/thrillers, and an IndieReader Discovery Award for General Fiction.

Yeager resides in Oakland and at The Sea Ranch, both in California.


McKeel Hagerty is a lifelong car lover and the Chief Executive Officer and driving force behind Hagerty, the world’s largest specialty automotive insurance provider. Under his leadership, Hagerty has grown from a local insurance agency operating from his parents’ basement in Traverse City, Michigan, to a global market leader. Hagerty is the leading provider of specialty insurance protecting nearly 2 million classic and enthusiast vehicles. In 2017, McKeel broadened the company’s mission to saving driving and growing the car community for future generations. To support those goals, the company has made a series of strategic partnerships, acquisitions, and expansions including the Hagerty Drivers Club (620,000 members), Hagerty Drivers Club magazine (600,000 circulation), Hagerty YouTube (1.3 million subscribers), DriveShare (peer to peer rentals), the Greenwich Concours d’Elegance, and the industry gold standard for vehicle values, the Hagerty Valuation Tool. His favorite car is his first, which he drives to this day—a 1967 Porsche 911S that he found in pieces in snowbanks behind a barn near his boyhood home and restored with the help of his dad.