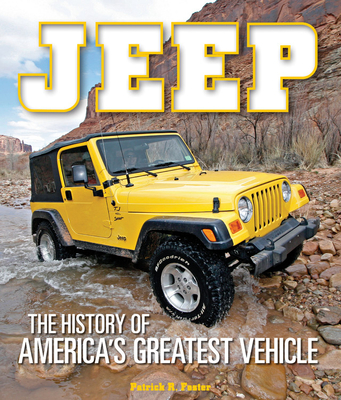 By Patrick R. Foster
Out of Print

The definitive, fully illustrated celebration of an auto manufacturer that paved its own way by going off-road. Few American vehicles, or vehicles made anywhere else in the world for that matter, are as universally iconic as the Jeep. From olive drab WWII military relics to the beloved Wrangler with its rear-mounted spare tire, open-air design, and telltale roll cage, the Jeep is a true classic. In Jeep: The History of America's Greatest Vehicle, automotive writer Patrick R. Foster chronicles over 70 years of Jeep vehicle design and production. Beginning with the Jeep as a crucial component of the American World War II fleet, Foster expertly recounts the corporate shifts, financial struggles and successes, close calls, and, above all, the enduring machines that have carried Jeep from the early 1940s to its triumphant role as a modern-day embodiment of American perseverance. Three hundred color and black-and-white historical photos complement his expertly written narrative of Jeep's entire history, reminding us that sometimes, the road less traveled was just waiting for the right truck.

One of America’s best-known automotive writers, Patrick R. Foster has spent over 30 years studying the automotive industry. The leading authority on AMC and its predecessors, Pat has written several books on that subject along with many others, including Jeep, Studebaker, Hudson, Kaiser-Frazer, and Metropolitan. His popular columns appear in Hemmings Classic Car and Old Cars Weekly, and he has won awards for his books and articles from the AACA (Antique Automobile Club of America) and SAH (Society of Automotive Historians). In 2011, he was honored with the Lee Iacocca Award—one of the most coveted awards in automotive writing. His website is The Olde Milford Press (oldemilfordpress.com).

Patrick R. Foster (Milford, Connecticut) is a well-known and respected automotive writer and historian. Foster is an authority on AMC and its various sub-brands and has written a number of books on that automaker as well as many others, including Jeep and Studebaker. His writing has appeared in major car magazines and earned awards from the AACA (Antique Automobile Club of America) and the SAH (Society of Automotive Historians). In 2011, he was honored with the Lee Iacocca Award--one of the most coveted awards in automotive writing. His most recent book for Motorbooks is American Motors Corporation: The Rise and Fall of America's Last Independent Automaker.