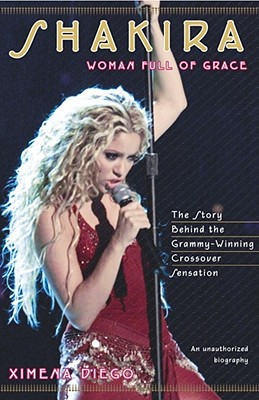 By Ximena Diego
$13.95
Available from our Warehouse (Not in store currently)

Shakira's crossover success has been predicted for years by those in the know. She landed her first record deal when she was a mere thirteen years old, recorded her second album at fifteen, and starred in a popular soap opera in her native Colombia. She was only nineteen when her third album, Pies descalzos (Barefoot), made her the bestselling female rock star in Latin America. Though her fourth album, Dónde están los ladrones? (Where Are the Thieves?), went platinum eight times in the U.S., it was her electrifying performance at the first annual Latin Grammys that captured the attention of the nation.
Despite finding great success at such a young age, twenty-four-year-old Shakira remains remarkably balanced, confounding the usual stereotypes associated with rock stars. She is a devout Catholic, lives with her parents, and travels everywhere with them. She is one of those rare stars who combine talent, charisma, and boldness, and at the same time keep their feet firmly planted on the ground.
For the most exciting singer-songwriter to come out of Latin America since Ricky Martin, the possibilities are endless. For the millions who already buy her albums, Shakira represents the voice of a new generation.

Ernesto Lechner Interview Thanks to her memorable hooks, gorgeous looks, and impromptu belly-dancing sessions, Shakira is currently the most popular Latin female singer in all of the Americas.