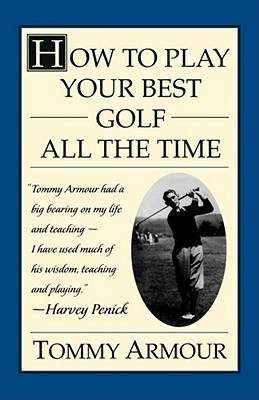 Tommy Armour's classic How to Play Your Best Golf All the Time provides timeless golf instruction on the following subjects:
* How to learn your best golf
* What can your best golf be?
* Taking you to the lesson tee
* How your clubs can help you
* The grip holds your swing together
* How to get ready to swing
* Footwork, the foundation of best golf
* The art of hitting with the hands
* The waggle, preliminary swing in miniature
* The pause that means good timing
* Assembling your game in good order
* Saving strokes with simple approach shots
* The fascinating, frustrating philosophy of putting
* The simple routine of an orderly golf shot
These classic bits of advice are accompanied by over four dozen two-color illustrations.

Born In Edinburgh, Scotland, and educated at the University there, like all British boys of his generation Tommy Armour left school to fight in the First World War.

He joined the Royal Scots as a machine gunner and later became an officer in the then new branch of the service, the Tanks Corps. While serving with the tanks he was caught in a mustard gas attack and lost his eyesight, but later he regained sight in his right eye.

The winner of many amateur golf events in Europe as well as the French Open, Armour came to the United States soon after the war ended and turned professional in 1925. In 1927 he won the U.S. Open Championship and the Canadian Open. Subsequently he went on to win every major championship: the British Open; the P.G.A.; the Western; the Metropolitan; and too many cash-prize tournaments to attempt to list.

In 1929 he took over the post of golf professional at the Boca Raton Club, in Florida, where over the next quarter of a century his instruction ranged prom teaching duffers how to break 100 to brushing up the games of the top tournament professionals when they couldn't iron out their own difficulties. Armour always claimed that the instructional part of his golf career was the best -- the part he enjoyed the most.

Harvey Penick Tommy Armour had a big bearing on my life and teaching -- I have used much of his wisdom, teaching and playing.

Jack Nicklaus Tommy Armour earned even more fame as a teacher than his fine playing record won for him. I'm not surprised that this book is one of the game's all-time best-sellers.