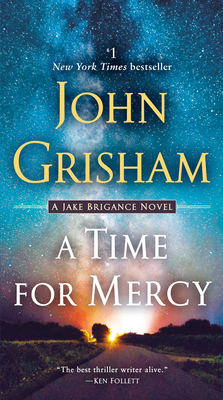 This is book number 3 in the Jake Brigance series.

#1 NEW YORK TIMES BESTSELLER • Jake Brigance is back! The hero of A Time to Kill, one of the most popular novels of our time, returns in a courtroom drama that The New York Times says is "riveting" and "suspenseful."

Clanton, Mississippi. 1990. Jake Brigance finds himself embroiled in a deeply divisive trial when the court appoints him attorney for Drew Gamble, a timid sixteen-year-old boy accused of murdering a local deputy. Many in Clanton want a swift trial and the death penalty, but Brigance digs in and discovers that there is more to the story than meets the eye. Jake’s fierce commitment to saving Drew from the gas chamber puts his career, his financial security, and the safety of his family on the line.

In what may be the most personal and accomplished legal thriller of John Grisham’s storied career, we deepen our acquaintance with the iconic Southern town of Clanton and the vivid cast of characters that so many readers know and cherish. The result is a richly rewarding novel that is both timely and timeless, full of wit, drama, and—most of all—heart.

Bursting with all the courthouse scheming, small-town intrigue, and stunning plot twists that have become the hallmarks of the master of the legal thriller, A Time for Mercy is John Grisham’s most powerful courtroom drama yet.

There is a time to kill and a time for justice. Now comes A Time for Mercy.

John Grisham is the author of forty-seven consecutive #1 bestsellers, which have been translated into nearly fifty languages. His recent books include The Judge's List, Sooley, and his third Jake Brigance novel, A Time for Mercy, which is being developed by HBO as a limited series.

Grisham is a two-time winner of the Harper Lee Prize for Legal Fiction and was honored with the Library of Congress Creative Achievement Award for Fiction.

When he's not writing, Grisham serves on the board of directors of the Innocence Project and of Centurion Ministries, two national organizations dedicated to exonerating those who have been wrongfully convicted. Much of his fiction explores deep-seated problems in our criminal justice system.

John lives on a farm in central Virginia.

"Grisham has returned to the place closest to his heart... The trial is riveting...it's striking how suspenseful the story is...how much we're gripped by the small details."–Sarah Lyall, The New York Times