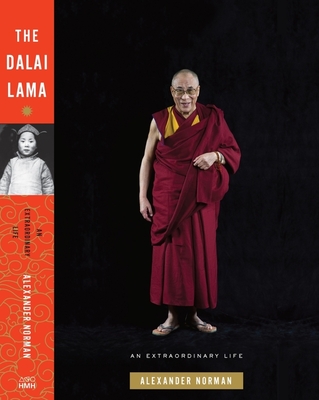 By Alexander Norman
$30.00
On Our Shelves Now

The first authoritative biography of the Dalai Lama—a story by turns inspiring and shocking—from an acclaimed Tibetan scholar with exceptional access to his subject.

The Dalai Lama’s message of peace and compassion resonates with people of all faiths and none. Yet, for all his worldwide fame, he remains personally elusive.  At last Alexander Norman—acclaimed Oxford-trained scholar of the history of Tibet—delivers the definitive, unique, unforgettable biography.

The Dalai Lama recounts an astonishing odyssey from isolated Tibetan village to worldwide standing as spiritual and political leader of one of the world’s most profound and complex cultural traditions. Norman reveals that, while the Dalai Lama has never been comfortable with his political position, he has been a canny player—at one time CIA-backed—who has maneuvered amidst pervasive violence, including placing himself at the center of a dangerous Buddhist schism. Yet even more surprising than the political, Norman convinces, is the Dalai Lama’s astonishing spiritual practice, rooted in magic, vision, and prophecy—details of which are illuminated in this book for the first time.

A revelatory life story of one of today’s most radical, charismatic, and beloved world leaders.

ALEXANDER NORMAN first met the Dalai Lama thirty years ago. Since then he has collaborated with the Tibetan Leader on several best-selling books, including the autobiography Freedom in Exile. He is the author of a critically acclaimed history of the Dalai Lamas, Holder of the White Lotus. In addition, he has served as a speech writer for His Holiness the Dalai Lama and on the Tibetan leader’s Special Review Committee. He is president of the London-based charity Help Tibet.

“Impressive in its clarity...this biography [is] the most detailed and accurate to date…the book, written in an engaging prose, ends with an insightful prediction of the legacy of the fourteenth Dalai Lama, and a cleareyed assessment of the challenges that the fifteenth will face.”
—New York Times Book Review

“The subtitle of Mr. Norman's book, 'An Extraordinary Life,' is an understatement...Mr. Norman knows the Dalai Lama better than most, having helped him to write his autobiography. His new book is rich...with detail; his supple prose, often beautiful, is as adept at explaining Tibet’s theology as it is at describing its spiritual world...Mr. Norman’s book, while respectful, is not adoring: He doesn’t flinch from offering examples of his subject’s behavior that are awkward.”
—Wall Street Journal

“This is the first authoritative biography of the Dalai Lama, and his life story reads like an adventure! Travel with him ... An amazing read!”
—Buzzfeed

“Alexander Norman's book is a revelation, placing the Dalai Lama in a vividly-told historical context while giving the reader an intimate glimpse of the man himself.”
—Jim Kelly, Air Mail

“Brilliant: the writing is a compelling blend of formal and informal styles covering events terrifying and wonderful (and many bits in between). Deserves a wide readership”—Charles Taliaferro, Oscar and Gertrude Boe Distinguished Chair and Professor of Philosophy, St. Olaf College. Editor-in-Chief of Open Theology

“Alexander Norman is uniquely qualified among western observers to deliver a definitive account of one of the most remarkable lives of the past century. His thoughtful and insightful biography is unlikely to be surpassed any time soon.”
—Dr. Solomon George FitzHerbert, Departmental Lecturer in Tibetan and Himalayan Studies, University of Oxford

“A compelling portrait . . . definitive book, which is sure to attract anyone seeking more insight into this enduring leader.”
—Library Journal

“[Norman] brings well-grounded authority to his portrayal of a figure revered throughout the world for his joyfulness, generosity, and compassion . . . a sturdy, comprehensive look at the Dalai Lama and his tumultuous world.”
—Kirkus Reviews