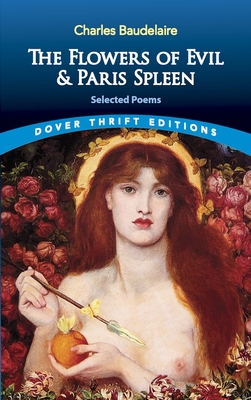 A sensitive translation by Wallace Fowlie renders these works into English. Voluptuous, burning, and heavy, at times foreshadowing Neruda, Baudelaire's poems shudder as if with fever and sing of beauty and horror in the same breath. I can't open this little volume without being arrested.

Sex and death, rebellion, corruption -- the themes of Charles Baudelaire's sensual poems sparked outrage upon their 1857 debut. His masterpiece, Flowers of Evil (Les Fleurs du Mal), was dismissed as decadent and obscene and banned in France for nearly a century. Although Baudelaire died in obscurity, today he is recognized as one of the nineteenth century's greatest and most influential poets, whose works were ahead of their time.
This unique collection captures the fevered spirit of the transition from Romanticism to Modernism with authoritative interpretations of fifty-one poems from Flowers of Evil. In addition, fourteen prose poems from the posthumously published Paris Spleen offer poignant reflections on the city and its humbler denizens. Noted scholar Wallace Fowlie provides definitive translations of these verses.

Poet, critic, and translator Charles Baudelaire (1821-67) was deeply affected by Gothic novels and the works of Edgar Allan Poe. A leading figure of the Decadent movement, he exercised enormous influence over subsequent poets and authors, including Rimbaud, Proust, and Eliot. He published his first and most famous book of poems, Flowers of Evil, at the age of 36 and died less than a decade later, after a life shadowed by debt, drug abuse, and disease.Translator Walter Fowlie was the James Duke Professor of French at Duke University.