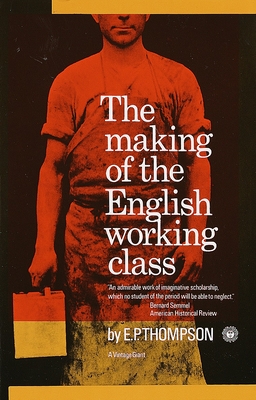 A seminal text on the history of the working class by one of the most important intellectuals of the twentieth century.

During the formative years of the Industrial Revolution, English workers and artisans claimed a place in society that would shape the following centuries. But the capitalist elite did not form the working class—the workers shaped their own creations, developing a shared identity in the process. Despite their lack of power and the indignity forced upon them by the upper classes, the working class emerged as England’s greatest cultural and political force. Crucial to contemporary trends in all aspects of society, at the turn of the nineteenth century, these workers united into the class that we recognize all across the Western world today. E.P. Thompson’s magnum opus, The Making of the English Working Class defined early twentieth-century English social and economic history, leading many to consider him Britain’s greatest postwar historian. Its publication in 1963 was highly controversial in academia, but the work has become one of the most influential social commentaries every written.

E.P. (Edward Palmer) Thompson was born in England in 1924 and graduated from Cambridge in 1946 with a degree in history. The Making of the English Working Class was instantly recognized as a classic upon its publication in 1963 and secured his position as one of the most influential historians of the twentieth century. Thompson was also a fervent activist and a key figure in the ending of the Cold War. He died in 1993.