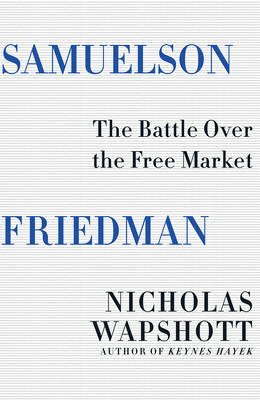 From the author of Keynes Hayek, the next great duel in the history of economics.

In 1966 two columnists joined Newsweek magazine. Their assignment: debate the world of business and economics. Paul Samuelson was a towering figure in Keynesian economics, which supported the management of the economy along lines prescribed by John Maynard Keynes’s General Theory. Milton Friedman, little known at that time outside of conservative academic circles, championed “monetarism” and insisted the Federal Reserve maintain tight control over the amount of money circulating in the economy.

In Samuelson Friedman, author and journalist Nicholas Wapshott brings narrative verve and puckish charm to the story of these two giants of modern economics, their braided lives and colossal intellectual battles.

Samuelson, a forbidding technical genius, grew up a child of relative privilege and went on to revolutionize macroeconomics. He wrote the best-selling economics textbook of all time, famously remarking "I don’t care who writes a nation’s laws—or crafts its advanced treatises—if I can write its economics textbooks." His friend and adversary for decades, Milton Friedman, studied the Great Depression and with Anna Schwartz wrote the seminal books The Great Contraction and A Monetary History of the United States. Like Friedrich Hayek before him, Friedman found fortune writing a treatise, Capitalism and Freedom, that yoked free markets and libertarian politics in a potent argument that remains a lodestar for economic conservatives today.

In Wapshott’s nimble hands, Samuelson and Friedman’s decades-long argument over how—or whether—to manage the economy becomes a window onto one of the longest periods of economic turmoil in the United States. As the soaring economy of the 1950s gave way to decades stalked by declining prosperity and "stagflation," it was a time when the theory and practice of economics became the preoccupation of politicians and the focus of national debate. It is an argument that continues today.

Nicholas Wapshott’s many books include biographies of Margaret Thatcher and Carol Reed, Keynes Hayek: The Clash That Defined Modern Economics, and The Sphinx: Franklin Roosevelt, the Isolationists, and the Road to World War II. He lives in New York City.

Summarising the debate between the two most important economists of the second half of the 20th century may seem like a monumental task, best consigned to specialist textbooks. But this brave history of the intellectual dual between Paul Samuelson and Milton Friedman proves that assumption wrong, with its focus as much on their lives as on their ideas.
— Zareer Masani - Literary Review

If you had to name the two most influential economists of the postwar decades, you would not go far wrong if you picked Paul Samuelson and Milton Friedman… As Wapshott shows, their arguments over the proper scope of government intervention and the control of inflation echo down to the present.
— Adam Tooze - Financial Times

This is a follow-up to the author’s Keynes Hayek. Its focus is with the debate between MIT’s Paul Samuelson and Chicago’s MiltonFriedman, whose contrasting views graced the pages of Newsweek for 18 years. Samuelson was an economist’s economist: his methodological influence was profound. Friedman had a huge influence on monetary economics. But his political influence was arguably even greater. By focusing on these two men, Wapshott illuminates debates that remain current to this day.