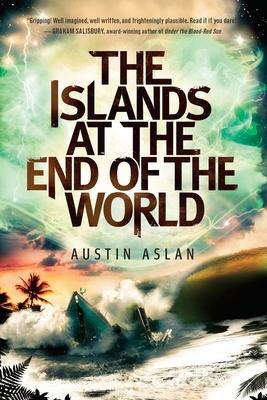 This is novel impossible to put down (or to get out of your mind, if you have to put it down) until the last page, and even then you wish there were more - which there will be. Aslan is working on a sequel now.

In this fast-paced survival story set in Hawaii, electronics fail worldwide, the islands become completely isolated, and a strange starscape fills the sky. Leilani and her father embark on a nightmare odyssey from Oahu to their home on the Big Island. Leilani’s epilepsy holds a clue to the disaster, if only they can survive as the islands revert to earlier ways.
A powerful story enriched by fascinating elements of Hawaiian ecology, culture, and warfare, this captivating and dramatic debut from Austin Aslan is the first of two novels. The author has a master’s degree in tropical conservation biology from the University of Hawaii at Hilo.

Praise for Islands at the End of the World:

"Aslan’s debut honors Hawaii’s unique cultural strengths--family ties and love of home, amplified by geography and history--while remaining true to a genre that affirms the mysterious grandeur of the universe waiting to be discovered."--Kirkus Reviews, Starred

Austin Aslan was inspired to write his debut novel, The Islands at the End of the World, while living on the Big Island of Hawaii. He earned a master’s degree in tropical conservation biology at the University of Hawaii at Hilo. His research on rare Hawaiian plants located on the high slopes of Mauna Loa won him a pair of destroyed hiking boots, a tattered rain jacket, and a National Science Foundation Graduate Research Fellowship. He lives outside Tucson, Arizona, deep in the Sonoran Desert, where he pets scorpions and hugs saguaro cacti with his high-school-sweetheart wife and their two young children. Austin is pursuing a PhD in geography at the University of Arizona and thinking up new stories while conducting ecosystem resilience research atop the Peruvian Andes. He continues to write fiction and looks forward to the publication of this novel’s sequel, The Girl at the Center of the World.

Kirkus starred review, May 15, 2014:
“A suspenseful and engaging series opener made all the more distinctive through its careful realization of setting.”

Publishers Weekly starred review, August 15, 2014:
“Debut author Aslan shows off his promise as a writer, delivering a fresh, of-the-moment take on apocalyptic fiction […] it's an exceptional adventure and survival story that's intimately tied to its setting.”