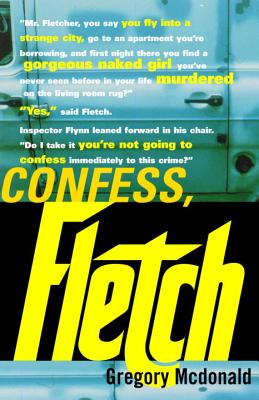 By Gregory McDonald
Hard to Find

This is book number 2 in the Fletch series.

The flight from Rome had been pleasant enough, even if the business he was on wasn’t exactly. His Italian fianc?e’s father had been kidnapped and presumably murdered, and Fletch is on the trail of a stolen art collection that is her only patrimony. But when he arrives in his apartment to find a dead body, things start to get complicated.

Inspector Flynn found him a little glib for someone who seemed to be the only likely suspect in a pretty clear case of homicide. He wasn’t exactly uncooperative, but it wasn’t like he was entirely forthcoming either. And Flynn wasn’t entirely convinced that the nineteenth-century Western artist Edgar Arthur Tharp really occupied most of Fletch’s thoughts.

With the police on his tail and a few other things to do beside prove his own innocence, Fletch makes himself at home in Boston, renting a van, painting it black, and breaking into a private art gallery. That is when he’s not “entertaining” his future mother-in-law
and visiting with the good Inspector Flynn and his family.

Gregory Mcdonald is the author of twenty-six books, including eleven Fletch novels and four Flynn mysteries. He has twice won the Mystery Writers of America’s prestigious Edgar Allen Poe Award for Best Mystery Novel, and was the first author to win for both a novel and its sequel. He died in 2008.

“Has all the zest, humor and spare lean prose of its forerunner: it has a beautifully complex plot which leaves you squirming at the final sentence and a set of slippery characters who never turn out to be just exactly what they seem. Confess, Fletch is as stimulent slipped into your nightcap that will have you up to dawn no matter what you think you have to do tomorrow.” --Joe Gores