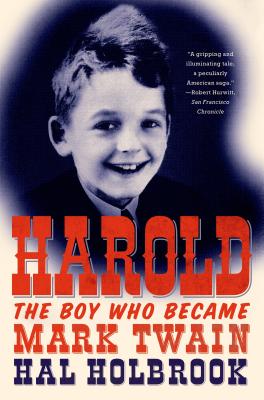 In Harold: The Boy Who Became Mark Twain, the beloved stage, film, and television actor Hal Holbrook presents an affecting memoir about his struggle to discover his true self, even as he learned to transform himself onstage.

Abandoned by his mother and father when he was two, Holbrook and his two sisters commenced separate journeys of survival. Raised by his powerful grandfather, who died when Holbrook was twelve, he spent his childhood at boarding schools, visiting his father in an insane asylum and hoping his mother would suddenly surface in Hollywood.

As World War II engulfed Europe, Holbrook began acting almost by accident. Through war, marriage, and the work of honing his craft, his fear of insanity and his fearlessness in the face of risk were channeled into discovering that the riskiest path of all—success as an actor—would be his birthright. The climb up that forbidding mountain was a lonely one. And how he achieved it—the cost to his wife and children and to his own conscience—is the dark side of the fame he would eventually earn by portraying the man his career would forever be most closely associated with: Mark Twain.

“If I were to conjure an image of an individual who best fits the phrase ‘a real American,’ it would be Hal Holbrook. This book shows him as a complete person. You will be compelled by the wit and wisdom of this beautifully composed story of self-determination and survival.”—Robert Redford

Hal Holbrook (1925-2021) was an award-winning, celebrated film, television, and stage actor. His one-man play Mark Twain Tonight! featured Holbrook portraying the famous author in a touring production starting in 1959 that played across the United States and in Europe. He won a Tony Award for his performance during the show’s Broadway run in 1966, and continued playing Twain on tours for more than sixty years.

The recipient of five prime-time Emmy Awards for acting, including as Abraham Lincoln in Sandberg’s Lincoln mini-series, he received an Academy Award-nomination for his role in Into the Wild. Holbrook also appeared in such films as All the President’s Men, Midway, Magnum Force, Wall Street, The Firm, and Lincoln. He had a recurring role on the sitcom Evening Shade, and appeared on such television shows as Hawaii Five-0, Grey’s Anatomy, Sons of Anarchy, and The Sopranos.

“[Harold is] a gripping and illuminating tale, a peculiarly American saga of loneliness, sometimes misguided determination, luck, perseverance, marital failure and the life of a touring player in pre-interstate America.” —San Francisco Chronicle

“Like Mark Twain, the alter ego he portrayed on the stage, actor Holbrook (All the President's Men, Into the Wild) has a knack for weaving delightful anecdotes with painful true stories . . . An insightful glimpse into Holbrook's personal and professional life, retold with amazing detail and written with intelligence and raw humor.” —Richard A. Dickey, Library Journal

“[Holbrook] tells his life story beautifully, moving smoothly from being a young boy abandoned by his parents . . . to enjoying a celebrated career on stage and screen. The reader is hooked right from the book's opening lines . . . Looking back with remarkable objectivity, Holbrook seems to be writing--with considerable sensitivity and insight--about another person entirely, someone who used to exist but has been overwritten by age and experience. This would be an unusual approach for any autobiography, and especially for a ‘star bio,' but it works remarkably well here, perhaps because, in Holbrook's case, his professional career is an important part of his life but hardly the only thing worth talking about.” —David Pitt, Booklist (starred review)

“Renowned stage and screen actor Holbrook recounts his early life in this stirring memoir . . . While Holbrook's career stretches on for another half century, this encapsulation of his first 34 years is a movingly honest account of a life spent searching for meaning and purpose.” —Publishers Weekly

“I could not put this book down until I finished it…One of the best books I’ve read in years.”—The Courier-Journal (Louisville)