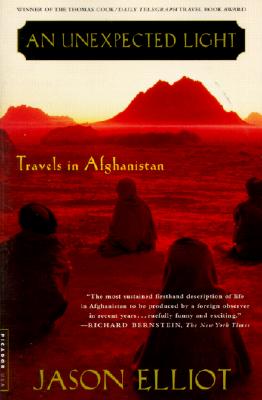 By Jason Elliot
This item is not available for sale on this site.

Part historical evocation, part travelogue, and part personal quest, "An Unexpected Light "is the account of Elliot's journey through Afghanistan, a country considered off-limits to travelers for twenty years. Aware of the risks involved, but determined to explore what he could of the Afghan people and culture, Elliot leaves the relative security of Kabul. He travels by foot and on horseback, and hitches rides on trucks that eventually lead him into the snowbound mountains of the North toward Uzbekistan, the former battlefields of the Soviet army's "hidden war." Here the Afghan landscape kindles a recollection of the author's life ten years earlier, when he fought with the anti-Soviet mujaheddin resistance during the Soviet occupation of Afghanistan.

Weaving different Afghan times and visits with revealing insights on matters ranging from antipersonnel mines to Sufism, Elliot has created a narrative mosaic of startling prose that captures perfectly the powerful allure of a seldom-glimpsed world.

Jason Elliot lives in London. "An Unexpected Light" is his first book.

"The most sustained firsthand description of life in Afghanistan to be produced by a foreign observer in recent years . . . exciting."—Richard Bernstein, The New York Times

"A work of substance and style, witty and moving by turns, never less than wholly passionate . . . What raises the book to the level of a classic is its intensely personal meditation on the magic of unplanned adventure, of the pain and pleasure of pushing into the unknown."—The Times (London)

"The surprise of the year: a lyrical, unrestrained and enthralling account of a journey into Afghanistan . . . I loved this book."—Daily Telegraph

"This extraordinary debut is an account of Elliot's two visits to Afghanistan. The first occurred when he joined the mujaheddin circa 1979 and was smuggled into Soviet-occupied Afghanistan; the second happened nearly ten years later, when he returned to the still war-torn land. The skirmishes that Elliot painstakingly describes here took place between the Taliban and the government of Gen. Ahmad Shah Massoud in Kabul. Today, the Taliban are in power, but Elliot's sympathies clearly lie with Massoud. Although he thought long and hard before abandoning his plan to travel to Hazara territory, where 'not a chicken could cross that pass without being fired on,' Elliot traveled widely in the hinterland, visiting Faizabad in the north and Herat in the west. The result is some of the finest travel writing in recent years. With its luminous descriptions of the people, the landscape (even when pockmarked by landmines), and Sufism, this book has all the hallmarks of a classic, and it puts Elliot in the same league as Robert Byron and Bruce Chatwin."—Library Journal

"An Unexpected Light is often unexpectedly funny and constantly perceptive, but it is also profound."—Jason Goodwin, The New York Times Book Review

"Elliot is an enthralling writer with a great gift for evoking places, people and atmosphere, from the pastoral calm of a fertile valley to the terrifying sights and sounds of war."—Merle Rubin, The Los Angeles Times

"Lyrical . . . alluring . . . a poignant remembrance, hued in the mixed reds of war and sunset, that comes close to a place that has already changed beyond imagination."—Paula Newberg, San Francisco Chronicle Book Review

"Humorous, honest and wry . . . [Elliot's] literary talents are exceptional. His sonorous prose moves forward with the purposeful grace of a river."—Publishers Weekly (starred)

"An Unexpected Light is an unexpected gift . . . Elliot's account is vivid and should broaden the reader's comprehension of an often misunderstood country."—Jonathan Shipley, Columbus Dispatch

"The author's impressive knowledge of Afghanistan's history, his seemingly boundless affection for its people, his understanding and respect for their culture and religion, and his flair for the language make this more than a casual travelogue. It is a plaintive love song whose discordant notes are provided by daily encounters with violence, hardship, and poverty."—Kirkus Reviews

"An Unexpected Light thoughtfully lays out new and overlooked information that policy-makers in the U.S. and the West as a whole need when trying to decide what may work."—Robert A. Lincoln, Richmond-Times Dispatch

"I am sure this book will soon be among the classics of travel."—Doris Lessing

"An astonishing debut: one of the most remarkable travel books this decade."—Willam Dalrymple