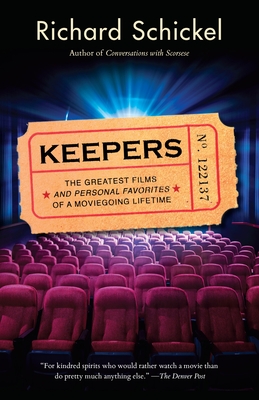 After six decades of writing about film, acclaimed critic Richard Schickel generously shares Keepers, a history of film as he’s seen and lived it. Here is a tour of his favorites from Snow White and the Seven Dwarfs to Pulp Fiction, and a master class in what makes a film soar or flop. Schickel reminds us of the subjective art of film criticism, highlighting above all the true gems, the immortal moments of transcendent “movie magic”—the scenes, characters, lines, shots, scores, and even lighting cues—that have stuck with him over a lifetime of movie-watching. Buster Keaton, His Girl Friday, Ingrid Bergman, Taxi Driver, Star Wars, Stanley Kubrick—Schickel reveals all the films and the forces behind them that have kept him coming back for more.

Richard Schickel is a film critic, documentary filmmaker, and movie historian. His books include Conversations with Scorsese; Clint Eastwood: A Biography; Intimate Strangers: The Culture of Celebrity in America; and D. W. Griffith: An American Life. His documentaries include Charlie: The Life and Art of Charles Chaplin; Woody Allen: A Life in Film; and Shooting War, about combat cameramen in World War II. He has held a Guggenheim Fellowship and was awarded the British Film Institute Book Prize, the Maurice Bessy Prize for film criticism, and the William K. Everson Award for his work in film history.

“Only a few critics are worth listening to, and Richard Schickel, at eighty-two, stands among them. . . . Thoughtful and accessible." —The Wall Street Journal

"A true memoir of a life at the movies, and as always Schickel is elegant, wry, sad sometimes, but then lit up by something wonderful on the screen. I think this is his most touching book." —David Thomson, author of A New Biographical Dictionary of Film

“Schickel found writing this collection ‘a rather playful business’; readers will find it infused with his joy." —Kirkus Reviews

“One factor that sets Keepers apart from other books extolling Hollywood’s best . . . is its author, film critic and historian Richard Schickel, a keeper himself after a half-century of ruminating about the cinema." —The Associated Press

“Schickel has an admirable compassion for younger people whose memories don’t go back as far as his do, but he also has an urgent sense of how important it is to remember what we already know, and to learn what we don’t." —Martin Scorsese

“Schickel’s insights, when he chooses to go a little deeper, are terrific and accomplish what they should in a book like Keepers: Make you want to see the movies he’s writing about." —Milwaukee Journal Sentinel

“He knows the psychological landscape of the movies better than almost anyone. A sagacious and fiercely independent-minded observer." —Daphne Merkin