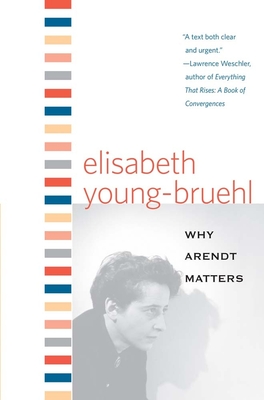 From Arendt’s preeminent biographer, an exploration of the particular relevance of the great philosopher’s thought to the world of today

Upon publication of her “field manual,” The Origins of Totalitarianism,in 1951, Hannah Arendt immediately gained recognition as a major political analyst. Over the next twenty-five years, she wrote ten more books and developed a set of ideas that profoundly influenced the way America and Europe addressed the central questions and dilemmas of World War II. In this concise book, Elisabeth Young-Bruehl introduces her mentor’s work to twenty-first-century readers. Arendt’s ideas, as much today as in her own lifetime, illuminate those issues that perplex us, such as totalitarianism, terrorism, globalization, war, and “radical evil.”

Elisabeth Young-Bruehl, who was Arendt’s doctoral student in the early 1970s and who wrote the definitive biography of her mentor in 1982, now revisits Arendt’s major works and seminal ideas. Young-Bruehl considers what Arendt’s analysis of the totalitarianism of Nazi Germany and the Stalinist Soviet Union can teach us about our own times, and how her revolutionary understanding of political action is connected to forgiveness and making promises for the future. The author also discusses The Life of the Mind, Arendt’s unfinished meditation on how to think about thinking. Placed in the context of today’s political landscape, Arendt’s ideas take on a new immediacy and importance. They require our attention, Young-Bruehl shows, and continue to bring fresh truths to light.

Elisabeth Young-Bruehl is a faculty member at the Columbia Center for Psychoanalytic Training and Research and a practicing psychoanalyst. She received her Ph.D. in philosophy under Hannah Arendt’s supervision at the Graduate Faculty of the New School for Social Research. She lives in New York City.