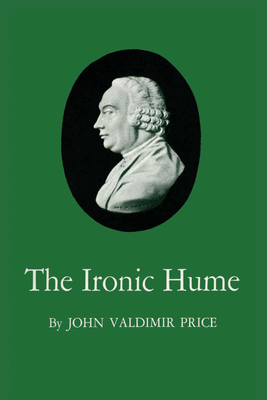 By John Valdimir Price
$19.95
Available from our Warehouse (Not in store currently)

Many of the seemingly bland assertions and bald statements of the eighteenth-century philosopher David Hume contain more than the mind immediately perceives. Author John Valdimir Price contends that an understanding of Hume's writings cannot be separated from an understanding of his life. By examining the works of Hume, Price shows the way in which an ironic way of seeing events and an ironic mode of expression permeated Hume's life and writings. Price examines Hume's irony as it is exhibited in letters to his friends and in his writings concerned with morality, people, philosophy, politics, history, and above all religion. Hume's opinions on life in general are stated in works ranging from the Treatise of Human Nature and the Essays, Moral and Political, through the Enquiry concerning Human Understanding and the Enquiry concerning Principles of Morals, to the Dialogue and Four Dissertations of his maturity. Price feels that Hume's recognition of the ironic in life came about from his perception of the disproportion between human hopes and human accomplishments. The rhetorical consequences of applying reason to a duality in human nature creates the ironic mode. Hume conceived man's opposing tendencies as his willingness to commit himself orally to a concept, a dogma, an idea, or an ideology, and his unwillingness to involve himself in the logical and rhetorical implications of articulating those principles. Hume's use of the ironic mode in his writings provides him with a means of challenging certain dogmatic assumptions common to thought, particularly to traditional religious thought; it acts as a mask for his sceptical intentions, and it is an implied criticism of many ideas. In his political writing, Hume frequently implied that the question under argument was almost too ridiculous to deserve serious treatment. This tactic was effectively employed in the Account of Stewart, in which Hume came to the defense of a friend. In his most profitable venture, the History of England, Hume not only used irony to advantage, but developed a new approach to the writing of history--the use of narrative. He presented history as a series of more or less connected events, not as a series of right or wrong attitudes. The author believes that Hume's initial religious scepticism, combined with the predominant satiric-ironic mode in the literature of his time, led him to seek irony as a method of self expression. This scepticism, which permeated all of Hume's attitudes toward life, reached its most complete expression in the Dialogues concerning Natural Religion, which accepted reason as its guide, but also accepted experience as its master.