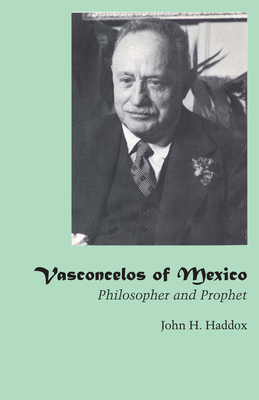 By John H. Haddox
$19.95
Available from our Warehouse (Not in store currently)

Jos Vasconcelos--lawyer, politician, writer, educator, philosopher, prophet, and mystic--was one of the most influential and controversial figures in the intellectual life of twentieth-century Mexico. Vasconcelos was driven by the desire to gain a complete and comprehensive vision of reality, employing his own aesthetic-emotive method and a poetic mode of expression. The complex philosophical system that resulted is what he called "aesthetic monism." But this is only one side of the man. Vasconcelos was also vitally interested in both the proximate realities and remote possibilities of Mexico, in the character of the "cosmic race" of his homeland, and in the relations between his own country and the others of this hemisphere. Soon after Vasconcelos's death in 1959, Eduardo Garc a M ynez spoke of him, in a moving tribute, as "without question the most inspiring intellectual and human figure that Mexico has produced." Unhappily--and perhaps disgracefully--he has remained almost unknown outside the Spanish-speaking world. Histories of Mexico published in English usually give passing mention to his role as Minister of Public Education or his unsuccessful campaign for the presidency, but his aesthetic system and his socio-political ideas have been ignored by philosophers in the United States. Here, for the first time, is a unified, inclusive, and occasionally critical presentation of the entire range of Vasconcelos's thought, from his metaphysics and theory of knowledge through his aesthetics and ethics to his social and political philosophy. It is enriched by an appendix in which the most significant passages from Vasconcelos's own philosophical writings are presented in English translations.