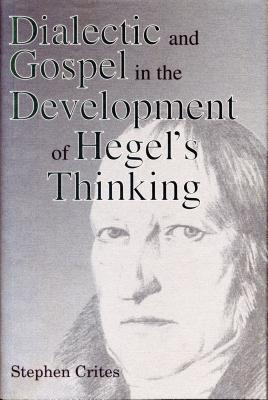 Hegel came to maturity as a philosopher during the first years of the nineteenth century, developing through prodigious intellectual struggles a highly original conception of dialectic as a method for rationally comprehending traumatic historical change. At the same time, he continued a process begun earlier, of critical engagement with the Christian gospel and its historical ethos. Hegel spent much of his youth reacting against this drama and its cultural expression. By the time he published his early masterpiece, the Phenomenology of Spirit (1807), he had found an ingenious way of reconstructing it in counterpoint with his new dialectical understanding of historical experience.

Dialectic and Gospel in the Development of Hegel's Thinking tells the story of this interplay as it develops in Hegel's thinking. It culminates in a fresh interpretation of the Phenomenology of Spirit and a detailed commentary on larger portions of the text relevant to that story. Crites's reading of the masterpiece is contextualized by three substantial chapters detailing the course of Hegel's reflections on Christian themes through the first thirty-five years of his life. These chapters are both biographical and textual, treating not only the philosopher's personal and intellectual development but also the major cultural influences that informed it. Hegel is seen to have begun as a child of the Enlightenment powerfully, affected by the Romantic reaction to the Enlightenment, who finds his way to his own position as a founding genius of German Idealism and its historical dialectic. His development is thus interpreted as an epitome of a major transformation in European intellectual history.

Stephen Crites is Hedding Professor of Moral Science and Professor of Philosophy at Wesleyan University. He is translator of Crisis in the Life of an Actress and Other Essays on Drama (1967) and author of In the Twilight of Christendom: Hegel vs. Kierkegaard on Faith and History (1972).