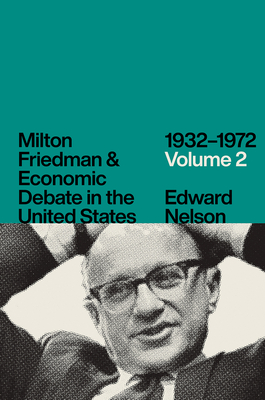 By Edward Nelson
$67.50
Available from our Warehouse (Not in store currently)

Milton Friedman is widely recognized as one of the most influential economists of the twentieth century. Yet no previous study has distilled Friedman’s vast body of writings into an authoritative account of his research, his policy views, and his interventions in public debate. With this ambitious new work, Edward Nelson closes the gap: Milton Friedman and Economic Debate in the United States is the defining narrative on the famed economist, the first to grapple comprehensively with Friedman’s research output, economic framework, and legacy.

This two-volume account provides a foundational introduction to Friedman’s role in several major economic debates that took place in the United States between 1932 and 1972. The first volume, which takes the story through 1960, covers the period in which Friedman began and developed his research on monetary policy. It traces Friedman’s thinking from his professional beginnings in the 1930s as a combative young microeconomist, to his wartime years on the staff of the US Treasury, and his emergence in the postwar period as a leading proponent of monetary policy. The second volume covers the years between 1960 and 1972— years that saw the publication of Friedman and Anna Schwartz’s Monetary History of the United States. The book also covers Friedman’s involvement in a number of debates in the 1960s and 1970s, on topics such as unemployment, inflation, consumer protection, and the environment.

As a fellow monetary economist, Nelson writes from a unique vantage point, drawing on both his own expertise in monetary analysis and his deep familiarity with Friedman’s writings. Using extensive documentation, the book weaves together Friedman’s research contributions and his engagement in public debate, providing an unparalleled analysis of Friedman’s views on the economic developments of his day.

Edward Nelson is an economist in the division of monetary affairs at the Board of Governors of the Federal Reserve System.

"Edward Nelson knows more about Milton Friedman’s economics than anyone else alive. In two weighty volumes, he begins to share that knowledge with us. . . .Readers of the two chronological parts—even those who have already studied carefully Friedman’s major works—will learn much more from Nelson about the incredible breadth and diversity of Friedman’s academic research."
— Peter N. Ireland

“This monumental masterpiece will be the definitive work on Milton Friedman’s contributions to monetary economics and his role in the major economic debates in the United States. Nelson, an eminent specialist in monetary economics, casts a wide net over Friedman’s publications, interviews, and other public statements and provides a fascinating, illuminating, and complete analysis of the evolution of Friedman’s economic views into a coherent and consistent framework. An indispensable read and reference for a thorough and deep understanding of Friedman’s work and his impact on the major economic debates of the time.”
— Lars E. O. Svensson, Stockholm School of Economics

“Nelson has produced a masterful and unique narrative of Milton Friedman’s extensive participation in American debates on economic policy and theory up to 1972, with attention to its interplay with Friedman’s biographical trajectory and episodes in American economic history. These two volumes, partly based on archival material and several interviews, shed new light on one of the most influential economists of the twentieth century and his intellectual interactions with his peers.”
— Mauro Boianovsky, Universidade de Brasilia

“Milton Friedman is among the twentieth century’s most influential economists, both within his discipline and in the public policy sphere. We need a serious intellectual biography of Friedman, a thorough, well-informed, and lengthy study. Nelson’s work is first-rate history. His approach has forced him to master and weigh a prodigious body of writings, ensuring that his interpretation of Friedman’s ideas will become an important starting point for anyone else working on the evolution of economic ideas and policy in the second half of the last century.”
— David Laidler, University of Western Ontario