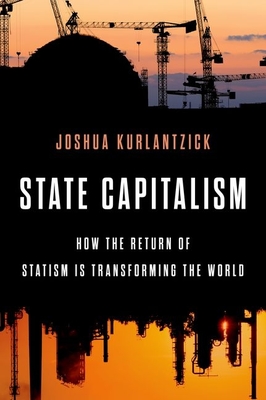 The end of the Cold War ushered in an age of American triumphalism best characterized by the "Washington Consensus: " the idea that free markets, democratic institutions, limitations on government involvement in the economy, and the rule of law were the foundations of prosperity and stability. The last fifteen years, starting with the Asian financial crisis, have seen the gradual erosion of that consensus. Many commentators have pointed to the emergence of a powerful new rival model: state capitalism. In state capitalist regimes, the government typically owns firms in strategic industries. Not beholden to private-sector shareholders, such firms are allowed to operate with razor-thin margins if the state deems them strategically important. China, soon to be the world's largest economy, is the best known state capitalist regime, but it is hardly the only one. In State Capitalism, Joshua Kurlantzick ranges across the world--China, Thailand, Brazil, Russia, South Africa, Turkey, and more--and argues that the increase in state capitalism across the globe has, on balance, contributed to a decline in democracy. He isolates some of the reasons for state capitalism's resurgence: the fact that globalization favors economies of scale in the most critical industries, and the widespread rejection of the Washington Consensus in the face of the problems that have plagued the world economy in recent years. That said, a number of democratic nations have embraced state capitalism, and in those regimes, state-backed firms like Brazil's Embraer have enjoyed considerable success. Kurlantzick highlights the mixed record and the evolving nature of the model, yet he is more concerned about the negative effects of state capitalism. When states control firms, whether in democratic or authoritarian regimes, the government increases its advantage over the rest of
society. The combination of new technologies, the perceived failures of liberal economics and democracy in many developing nations, the rise of modern kinds of authoritarians, and the success of some of the best-known state capitalists have created an era ripe for state intervention. State Capitalism offers the sharpest analysis yet of what state capitalism's emergence means for democratic politics around the world.

Joshua Kurlantzick is Senior Fellow for Southeast Asia at the Council on Foreign Relations and author of both Democracy in Retreat: The Revolt of the Middle Class and the Worldwide Decline in Representative Government and Charm Offensive: How China's Soft Power is Transforming the World. Previously, he was a scholar at the Carnegie Endowment for International Peace.