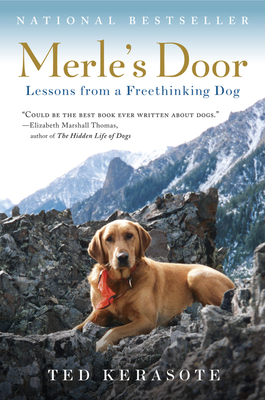 A moving, insightful love story about the vast possiblities of the relationship between humans and dogs.


While on a camping trip, Ted Kerasote meets a Labrador mix living on his own in the wild. They become attached to each other, and Kerasote decides to bring the dog, who he names Merle, home. There, after realizing that Merle’s native intelligence would be diminished by living exclusively in the human world, he installs a dog door in his house, allowing Merle to live both outside and in.

Merle shows Kerasote how dogs might live if they were allowed to make more of their own decisions, and Kerasote suggests how these lessons can be applied universally, bringing to bear the latest research into animal consciousness and behavior, as well as insights into the origins and evolution of the human-dog partnership. A deeply touching portrait of a remarkable dog and his relationship with the author, Merle’s Door explores the issues that all animals and their human companions face as their lives intertwine.

TED KERASOTE is the author of several books, including the national bestseller Merle’s Door: Lessons from a Freethinking Dog and Out There, which won the National Outdoor Book Award. His essays and photographs have appeared in Audubon, Geo, Outside, Science, the New York Times, and more than sixty other periodicals. He lives in Jackson Hole, Wyoming.

"The world is lucky to have this book."—ELIZABETH MARSHALL THOMAS, author of THE HIDDEN LIFE OF DOGS

PRAISE FOR OUT THERE

"[A] sly, funny, and wise look at the world beyond the walls that we erect to keep ourselves safe from the wilderness and to keep the wilderness safe from us."—ALEXANDRA FULLER, author of DON’T LET’S GO TO THE DOGS TONIGHT