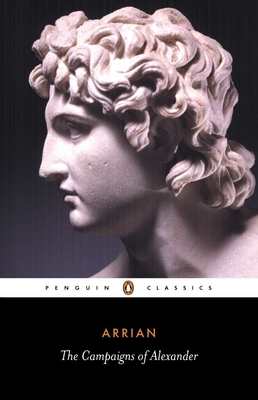 'His passion was for glory only, and in that he was insatiable'

Although written over four hundred years after Alexander’s death, Arrian’s Campaigns of Alexander is the most reliable account of the man and his achievements we have. Arrian’s own experience as a military commander gave him unique insights into the life of the world’s greatest conqueror. He tells of Alexander’s violent suppression of the Theban rebellion, his total defeat of Persia, and his campaigns through Egypt, India and Babylon – establishing new cities and destroying others in his path. While Alexander emerges from this record as an unparalleled and charismatic leader, Arrian succeeds brilliantly in creating an objective and fully rounded portrait of a man of boundless ambition, who was exposed to the temptations of power and worshipped as a god in his own lifetime.

Aubrey de Sélincourt’s vivid translation is accompanied by J. R. Hamilton’s introduction, which discusses Arrian’s life and times, his synthesis of other classical sources and the composition of Alexander’s army. The edition also includes maps, a list for further reading and a detailed index.

Arrian, or Lucius Flavius Arrianus, was a Greek born of well-to-do parents at Nicomedia, the capital of the Roman province of Bithynia, probalbly a few years before A.D. 90. His father had been granted Roman citizenship which enabled Arrian to take up his career in the imperial service. In about A.D. 108 he studied philosophy under Epictetus and wrote down his sayings in the Discourses, and a summary of his teachings in a Manual. His imperial advancement was rapid, and in A.D. 129 or 130 he achieved the consulship. But it was his appointment as governor of the border province of Cappadocia a year later which shows how greatly the Emperor Hadrian trusted his undoubted military and administrative abilities. His command included two Roman legions and numerous auxiliary troops, a rare, perhaps unexampled, responsibility for a Greek at that time. In A.D. 134 he drove the invading Alans out of Armenia in a campaign he describes in The Formation against the Alans. He also wrote a Tactical Manual for cavalry, and the Circumnavigation of the Black Sea, an account of the voyage he undertook from Trapezus to Dioscurias in 131-2. He retired or was recalled before the death of Hadrian in 138, and devoted the rest of his life to writing, living at Athens. He became an Athenian citizen and rose to be chief magistrate in 145, which qualified him to become a member of the Areopagus, the chief governing body of Athens. Nothing further is known for certain of his life. The surviving works of Arrian's Athenian period are a handbook, On the Chase, The Campaigns of Alexander in seven books, and the Indica, an account of the voyage of Alexander's fleet form India to the Perisian Gulf.

Aubrey de Sélincourt, scholar and translator, translated Livy’s The Early History of Rome (Books I—V) and The War with Hannibal (Books XXI—XXX), The Histories of Herodotus and The Campaigns of Alexander by Arrian, all for the Penguin Classics. He was born in 1896 and educated at Rugby, and University College, Oxford. A schoolmaster of genius for twenty-six years, he retired in 1947 to the Isle of Wight, where he lived until his death in 1962.