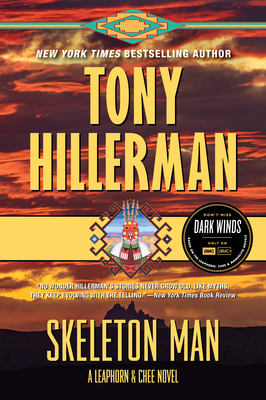 This is book number 17 in the A Leaphorn and Chee Novel series.

“In his masterly reworking of this powerful myth, Hillerman creates a kachina for contemporary times. . . . No wonder Hillerman’s stories never grow old. Like myths, they keep evolving with the telling.”— New York Times Book Review

Though he may be retired, Navajo Tribal Police Lieutenant Joe Leaphorn hasn’t lost his curiosity or his edge. He’s eager to help Sergeant Jim Chee and his fiancée Bernie Manuelito with their latest case—clearing an innocent kid accused of robbing a trading post.

Billy Tuve claims he received the precious diamond from a strange old man in the canyon. Could it be one of the gems that went missing in an epic plane crash decades earlier? Now that it may have resurfaced, it’s attracted dangerous strangers to the Navajo lands.

Proving Billy’s innocence won’t be easy. Leaphorn, Chee, and Manuelito must find the remains of a passenger who died in the crash—one of 172 lost souls whose remains were scattered across the magnificent tiered cliffs of the Grand Canyon.

But nature may prove their deadliest adversary. To find the proof they need, the detectives must battle a thunderous monsoon and a killer as they plunge deeper into the dark realm of the Hopi Lord of Death—the guardian of the underworld known as Skeleton Man.

“Considerable suspense in the race to the bottom of one of the most spectacular and treacherous landscapes Hillerman’s ever explored.” — Kirkus Reviews

“One of his strongest and most specific plots...amusingly wry dialogue...keenly observed detail.” — Santa Fe New Mexican

“A fascinating whodunit and a window into a rich culture . . . a gem.” — People