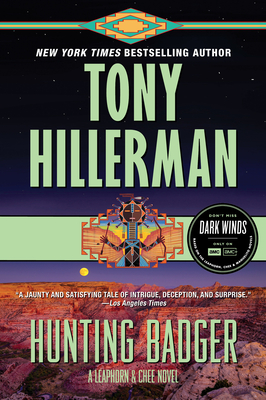 This is book number 14 in the A Leaphorn and Chee Novel series.

Three men raid the gambling casino run by the Ute nation and then disappear into the maze of canyons on the Utah-Arizona border. When the FBI, with its helicopters and high-tech equipment, focuses on a wounded deputy sheriff as a possible suspect, Navajo Tribal Police Sergeant Jim Chee and his longtime colleague, retired Lieutenant Joe Leaphorn, launch an investigation of their own. Chee sees a dangerous flaw in the federal theory; Leaphorn sees intriguing connections to the exploits of a legendary Ute bandit-hero. And together, they find themselves caught up in the most perplexing—and deadly—criminal manhunt of their lives.

"It's his best." — Rocky Mountain News

“Hillerman returns to his time-tested heroes, Navajo tribal police officer Sergeant Jim Chee and Lieutenant Joe Leaphorn (retired), for yet another satisfying mystery….Based in part on a real 1998 case, the story concerns the armed robbery of a casino on the Ute reservation….Hillerman is in top form, creating dialogue that will bring listeners into real sympathy with the people and proceedings described.”  — Publishers Weekly

“Plenty of action and surprises, along with dynamic central characters struggling to live in the modern world without sacrificing their culture.”  — Library Journal