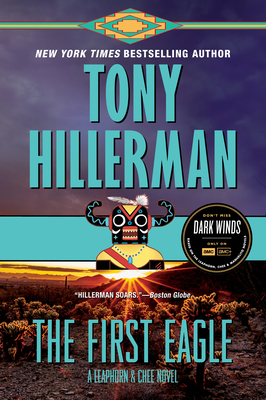 This is book number 13 in the A Leaphorn and Chee Novel series.

“The First Eagle displays all the strengths of Hillerman’s writing: a vivid sense of place, nuanced characters, and a complex, engrossing plot.”  — Washington Post

When Acting Lt. Jim Chee catches a Hopi poacher huddled over a butchered Navajo Tribal police officer, he has an open-and-shut case—until his former boss, Joe Leaphorn, blows it wide open. Now retired from the Navajo Tribal Police, Leaphorn has been hired to find a hotheaded female biologist hunting for the key to a virulent plague lurking in the Southwest. The scientist disappeared from the same area the same day the Navajo cop was murdered. Is she a suspect or another victim? And what about a report that a skinwalker—a Navajo witch—was seen at the same time and place too? For Leaphorn and Chee, the answers lie buried in a complicated knot of superstition and science, in a place where the worlds of native peoples and outside forces converge and collide.

“The First Eagle displays all the strengths of Hillerman’s writing: a vivid sense of place, nuanced characters, and a complex, engrossing plot.”  — Washington Post

“The two puzzles dovetail nicely, with Hillerman once again fusing mystery with an astute view of contemporary Navajo culture.”  — Booklist

“The author is a master of his game.” — Chattanooga Times

"Complex, engrossing...On their own, [Leaphorn and Chee] are compelling; as a duo they're the best since Lennon and McCartney." — Washington Post Book World

“Hillerman’s trademark melding of Navajo tradition and modern culture is captured with crystal clarity in this tale of an ancient scourge’s resurgence in today’s world. The uneasy mix of old ways and new is articulated with resonant depth.” — Publishers Weekly