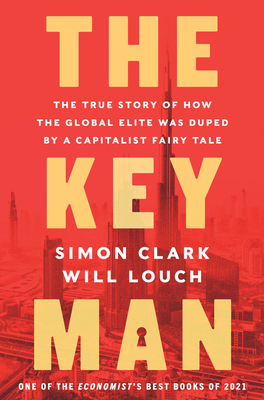 LONGLISTED FOR THE FINANCIAL TIMES & MCKINSEY BUSINESS BOOK OF THE YEAR

ONE OF THE ECONOMIST'S BEST BOOKS OF 2021

In this compelling story of lies, greed and tarnished idealism, two Wall Street Journal reporters investigate a man who Bill Gates, Western governments, and other investors entrusted with billions of dollars to make profits and end poverty, but who now stands accused of masterminding one of the biggest, most brazen financial frauds ever.

Arif Naqvi was charismatic, inspiring, and self-made—all the qualities of a successful business leader. The founder of Abraaj, a Dubai-based private-equity firm, Naqvi was the Key Man to the global elite searching for impact investments to make money and do good. He persuaded politicians he could help stabilize the Middle East after 9/11 by providing jobs and guided executives to opportunities in cities they struggled to find on the map. Bill Gates helped him start a $1 billion fund to improve healthcare in poor countries and the UN and Interpol appointed him to boards. As Pope Francis blessed a move to harness capitalism for the good of the poor, Naqvi won the support of Obama’s administration and investors, who compared him to Tom Cruise in Mission: Impossible.

In 2018, Simon Clark and Will Louch were contacted by an anonymous whistleblower who said Naqvi had swindled investors out of hundreds of millions of dollars and offered bribes to sustain his billionaire lifestyle. Digging into the claims, Clark and Louch uncovered hundreds of documents and exposed the wrongdoing. In April 2019—months after their exposé broke—Naqvi was arrested on charges of fraud and racketeering, and faces up to 291 years in jail.

Populated by a cast of larger-than-life characters and moving across Asia, Africa, Europe and America, The Key Man is the story of how the global elite was duped by a capitalist fairytale. Clark and Louch shine a light on efforts to clean up global capital flows even as opaque private equity firms amass trillions of dollars and offshore tax havens cast a veil of secrecy which prevents regulators, investors and citizens from understanding what’s really going on in the finance industry.

Simon Clark is a journalist and writer. He previously worked at the Wall Street Journal. His investigative reporting has led him to the poppy fields of Afghanistan, the copper mines of Congo and to many banks in the City of London. He was nominated for a Pulitzer Prize in 2016. He lives in Lewes, England.

“This splendid cautionary tale lays bare the vulnerabilities of the world of high finance, where even the grandees of Davos were marks for the kid from Karachi, who could, seemingly, simultaneously produce mega-returns for investors and lift up poor people in the Third World—until, as Clark and Louch compellingly recount, he disastrously could not.“ — John Helyar, coauthor of Barbarians at the Gate

"An unbelievable true tale of greed, corruption, and manipulation among the world’s financial elite and how the World Bank, Bill Gates, and the governments of the US, UK, France, Germany, Norway, the Netherlands, Sweden, and Kuwait fell victim to the world’s largest private equity Ponzi scheme. This guy makes Bernie Madoff look like a saint.” — Harry Markopolos, the Bernie Madoff whistleblower

“Arif Naqvi separated billionaires and royalty from their wealth by appealing to their private conceit that they had made their billions doing God’s work. The twists and turns of the increasingly desperate effort to raise funds to protect Arif’s reputation and keep Abraaj afloat—the near misses and lucky saves—are spellbinding. You won’t want to put the book down.” — Eileen Appelbaum, coauthor of Private Equity at Work

“How do you dupe the World Bank, the World Economic Forum, the Gates Foundation, and countless financial luminaries from around the globe? Attach yourself to the latest piece of financial gibberish—philanthrocapitalism—hire a couple of McKinsey consultants, and then get the Harvard Business School to write glowing reports about you. In this page-turner, Clark and Louch serve up an emphatic indictment of the ‘expert class’—people who think agility with numbers is somehow equivalent to wisdom and morality.”  — Duff McDonald, author of The Golden Passport

“The writing matches that of the best thrillers, with one huge extra bonus: you learn tons, even if you know this industry reasonably well. The rigor and colossal effort that went into this book transpires on each page. There is no dull moment. It is 300 pages of reading pleasure mixed with serious discomfort at what is being presented: the world of finance as it can be.” — Ludovic Phalippou, professor of financial economics at Saïd Business School, University of Oxford

"Simon Clark and Will Louch do us a service with their highly readable reminder of how greed and gullibility so often go together, and why we need good investigative journalism to keep reminding us that if the pitch (and the person doing the pitch) look just too good to be true, there is probably something fishy going on behind the scenes." — David Omand, former director of GCHQ and author of How Spies Think

"A rip-roaring account of one of the biggest frauds in corporate history. Through a pacey and deeply researched narrative, Clark and Louch unpick how a private equity trailblazer convinced some of the world’s richest and most sophisticated investors to part with their money—with devastating consequences. A must-read for anyone who is skeptical about the claims made by investment companies about their ethical credentials and motives." — Owen Walker, award-winning journalist and author of Built on a Lie

"Compelling and disturbing, the book is a pointed tale of hubris, greed, and the narrow limits of so-called capitalistic ‘benevolence’ in the era of growing economic inequality. . . . Timely and provocative reading on one of the many perils of the murky private equity world." — Kirkus Reviews

"A riveting chronicle of the meteoric rise and scandalous fall of the Dubai private equity firm Abraaj and its conniving founder, Arif Naqvi. . . . This deeply reported tale captivates." — Publishers Weekly

"A meticulously researched, compelling reminder of the importance of financial oversight. It should be required reading in business schools." — Library Journal

"The Key Man is a riveting account of the intertwining of brilliance and greed. . . . The book should be a mandatory read at all schools of journalism and business schools, for it is a rare tour de force from which both can learn." — Business Standard

"Impeccably researched and sumptuous in its detail. . . . It is a page-turner, built around a riveting portrait of the key man of the title. Mr. Naqvi comes across as a teeming mass of contradictions." — The Economist

"[Clark and Louch's] excellent book, which is more true crime than finance, describes in cinematic detail how Naqvi and his colleagues pumped up valuations, moved money between the company, its funds and their personal accounts, and lied about performance." — Reuters

"Well paced and cleverly organised. . . . Draws some devastating conclusions about our over-financialized economies; in particular the authors target the $4 trillion private-equity industry, which, if anybody has the courage to notice, should hereafter be subject to rigorous reform." — Sunday Times (London)

"A book that’s equally accessible to bank CEOs and those untutored in finance. . . . Clark and Louch have done an outstanding job in untangling the knots that usually keep the secretive world of private equity out of reach for most people. One hopes that their investigative work prompts regulators to strengthen their oversight of private equity—something that the titans of the $4 trillion industry have largely avoided so far." — Dawn (Pakistan)

"What the writers dissect marvellously is an all-too common tale of slick patter feeding off a degree of avarice and a large dollop of naivety. . . . It’s a sorry tale, one that raises important questions about our ability to deliver 'ethical' capitalism." — The National (UAE)