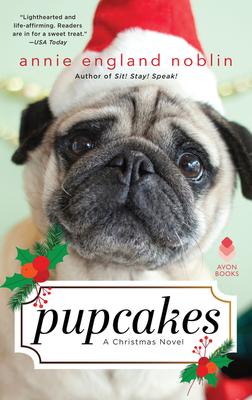 A perfect holiday novel about dogs, romance and starting over.  If you loved Jacqueline Sheehan’s Lost and Found or Meg Donohue’s Dog Crazy, this is the book for you.

He stood in the doorway, overweight, depressed, nearly homeless. He was a pug named Teddy Roosevelt, and he was Brydie Benson’s new full-time, four-legged housemate. True, Teddy was a bit gassy, a bit grumpy, but Brydie figured he was no worse than her ex-husband and probably more faithful. Plus, he was part of the deal: housesit Teddy and live in a lovely home rent-free.

Navigating her newly single world wasn’t easy, but Brydie knew a few things: first, she was a darn good baker. Second, she wasn’t going to let circumstances get the better of her. So she began to rebuild her world—making new friends, like cute local vet Nathan Reid, and Teddy’s irascible owner, Pauline Newman.

As Halloween turned to Christmastime, Brydie’s disdain for Teddy turned to a love. She realized that baking for Teddy could be just as satisfying as baking for humans—after all, dogs rarely complain. And somewhere, in between gluten free dog bones, crisp apple tarts, and Nate’s company, Brydie found the life she’d never known she always wanted.

Annie England Noblin lives with her son, husband, and three dogs in the Missouri Ozarks. She graduated with an M.A. in creative writing from Missouri State University and currently teaches English and communications for Arkansas State University in Mountain Home, Arkansas. She spends her free time playing make-believe, feeding stray cats, and working with animal shelters across the country to save homeless dogs.

Praise for Sit! Stay! Speak!: “This author has much to recommend her to Bark readers, including her decade-long work in animal rescue and this charming debut novel. [...] This is a touching and engaging book about friendships, family, and the power of dogs to inspire changes in our lives.”
— Bark Magazine

“SIT! STAY! SPEAK! by Annie England Noblin is a must read for any animal lover.”
— Fresh Fiction

“Noblin’s tale of self-discovery, populated with a colorful cast of characters, is both lighthearted and life-affirming. Readers are in for a sweet treat.”
— USA Today