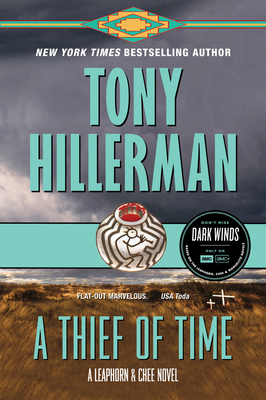 This is book number 8 in the A Leaphorn and Chee Novel series.

“All of Tony Hillerman’s Navajo tribal police novels have been brilliant, but A Thief of Time is flat-out marvelous.”—USA Today

From New York Times bestselling author Tony Hillerman, A Thief of Time is the eighth novel featuring Lieutenant Joe Leaphorn and Officer Jim Chee as they find themselves in hot pursuit of a depraved killer.

At a moonlit Indian ruin where "thieves of time" ravage sacred ground in the name of profit, a noted anthropologist vanishes while on the verge of making a startling, history-altering discovery. Amid stolen goods and desecrated bones, two corpses are discovered, shot by bullets fitting the gun of the missing scientist.

There are modern mysteries buried in despoiled ancient places, and Navajo Tribal Policemen Leaphorn and Chee must plunge into the past to unearth an astonishing truth and a cold-hearted killer. In his breakout novel, Hillerman paints a stunning portrait of the psychology of murder—and offers a heart-rending example of love and forgiveness.