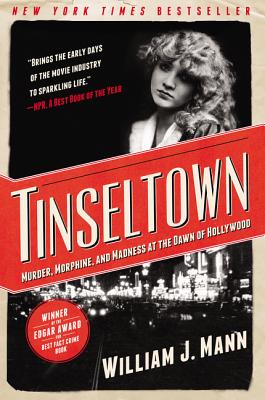 The Day of the Locust meets The Devil in the White City and Midnight in the Garden of Good and Evil in this juicy, untold Hollywood story: an addictive true tale of ambition, scandal, intrigue, murder, and the creation of the modern film industry.

By 1920, the movies had suddenly become America’s new favorite pastime, and one of the nation’s largest industries. Never before had a medium possessed such power to influence. Yet Hollywood’s glittering ascendency was threatened by a string of headline-grabbing tragedies—including the murder of William Desmond Taylor, the popular president of the Motion Picture Directors Association, a legendary crime that has remained unsolved until now.

In a fiendishly involving narrative, bestselling Hollywood chronicler William J. Mann draws on a rich host of sources, including recently released FBI files, to unpack the story of the enigmatic Taylor and the diverse cast that surrounded him—including three beautiful, ambitious actresses; a grasping stage mother; a devoted valet; and a gang of two-bit thugs, any of whom might have fired the fatal bullet. And overseeing this entire landscape of intrigue was Adolph Zukor, the brilliant and ruthless founder of Paramount, locked in a struggle for control of the industry and desperate to conceal the truth about the crime. Along the way, Mann brings to life Los Angeles in the Roaring Twenties: a sparkling yet schizophrenic town filled with party girls, drug dealers, religious zealots, newly-minted legends and starlets already past their prime—a dangerous place where the powerful could still run afoul of the desperate.

A true story recreated with the suspense of a novel, Tinseltown is the work of a storyteller at the peak of his powers—and the solution to a crime that has stumped detectives and historians for nearly a century.

William J. Mann is the New York Times bestselling author of Kate: The Woman Who Was Hepburn; How to Be a Movie Star: Elizabeth Taylor in Hollywood; Hello, Gorgeous: Becoming Barbra Streisand; and Wisecracker: The Life and Times of William Haines, winner of the Lambda Literary Award. He divides his time between Connecticut and Cape Cod.

“Mann tells his story expertly . . . When it’s all over, Mann has argued so ably for his killer-candidate that he finally may have put this controversy to rest.”
— Washington Post

“Mann’s call sheet of colorful characters is so richly painted, they not only make the Roaring ‘20s come to life, they’re so bizarre they seem like they could only exist in a movie.”
— Entertainment Weekly

“Mann’s got the goods . . . Tinseltown may well be the most completist murder mystery of all time.”
— Choire Sicha, BookForum

“Sex! Drama! Scandal! If you have the slightest curiosity about the dark purple scars of Hollywood history, this is the go-to book you cannot miss. . . Epic and fabulous—every page is haunting, every chapter a film noir. I was up all night.”
— Rex Reed

“William Mann fires on all cylinders in this fascinating real-life crime story that has stumped film fans since 1922. A page-turner with incredible research and prose double-boiled, Tinseltown is a whodunit tour de force, revealing the dark heart of Hollywood.”
— Patrick McGilligan, author of Alfred Hitchcock: A Life in Darkness and Light

“A stellar and gripping true-crime narrative . . . An engrossing and comprehensive look at the birth of the motion picture industry and the highs and lows it faced in the early 1920s . . . Mann has crafted what is likely to be a true-crime classic.”
— Publishers Weekly (starred review)

“Mann spins this yarn with all the suspense and intrigue of a Dashiell Hammett novel. From beginning to end, the engrossing true tale will keep you guessing.”
— Out Magazine

“The book’s power derives not just from piecing together the clues and analyzing motives; Los Angeles is very present as well.”
— Publishers Weekly

“A gripping true-crime story that encompasses a colorful period in film history . . . Mann seamlessly weaves the details of the murder investigation, witnesses and newspaper accounts into the rich history of early film . . . Mann masterfully captures the zeitgeist of Hollywood in its early days.”
— Kirkus Reviews (starred review)

“[A] gripping true-crime narrative. . . . Mann expertly juggles the various threads of the narrative to a satisfying conclusion that is sure to please both true-crime and film-history enthusiasts.”
— Booklist

“For folks interested in true crime and the heyday of Hollywood, this book is a match made in a rather sinister version of heaven.”
— Living Read Girl

“[Mann] brings the early days of the movie industry to sparkling life on the page, whether he’s evoking Los Angeles’ demimonde or explaining how the era’s scandals drove the film industry toward protectionism in the face of morality campaigns.”
— NPR, The Best Books of 2014

“Tinseltown is an immensely enjoyable read as a recreation of a murder, and a fascinating time [and] place.”
— McClatchy News Service

“A gripping true-crime narrative. . . . Mann expertly juggles the various threads of the narrative to a satisfying conclusion that is sure to please both true-crime and film-history enthusiasts.”
— Booklist

A lucid solution to the crime that feels almost as airtight as the final chapter of an Agatha Christie mystery.”
— Connecticut Post

“The book is so evocatively written, right down to the weather, characters’ glances, and what they are feeling, . .. [and] seductively cinematic . . . should be made into a film itself.”
— Daily Beast

Tinseltown is entertaining enough to feel illicit, but its reporting makes it an essential addition to any respectable bookshelf of L.A. history.”
— Los Angeles Times Book Review

“Author William J. Mann paints a striking portrait of Los Angeles in the Roaring Twenties--a sparkling yet schizophrenic town filled with party girls, drug dealers, religious zealots, newly-minted legends and starlets already past their prime; a dangerous place where the powerful could still run afoul of the desperate.”
— TCM.com

“Tinseltown does a fine job of parceling out its complex plot, and its author brings early Hollywood to life with the flair of a popular historian.”
— Wall Street Journal

“Mann spins this yarn with all the suspense and intrigue of a Dashiell Hammett novel. From beginning to end, the engrossing true tale will keep you guessing.”
— Out Magazine