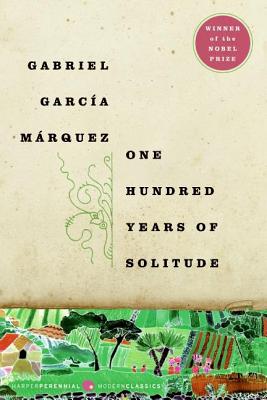 You will never see the world the same way again. You will learn to dream with your eyes open.

This is the book that won Garcia Marquez the Nobel Prize in Literature, and single-handedly created the genre of magical realism. And it's one of the best books that there is. Dammit. —Ty

"One Hundred Years of Solitude is the first piece of literature since the Book of Genesis that should be required reading for the entire human race. . . . Mr. Garcia Marquez has done nothing less than to create in the reader a sense of all that is profound, meaningful, and meaningless in life." —William Kennedy, New York Times Book Review

One of the most influential literary works of our time, One Hundred Years of Solitude remains a dazzling and original achievement by the masterful Gabriel Garcia Marquez, winner of the Nobel Prize in Literature.

One Hundred Years of Solitude tells the story of the rise and fall, birth and death of the mythical town of Macondo through the history of the Buendiá family. Inventive, amusing, magnetic, sad and alive with unforgettable men and women—brimming with truth, compassion, and a lyrical magic that strikes the soul—this novel is a masterpiece in the art of fiction.

Gabriel García Márquez was born in 1927 in the town of Aracataca, Columbia.Latin America's preeminent man of letters, he was awarded the Nobel Prize in Literature in 1982. García Márquez began his writing career as a journalist and is the author of numerous other works of fiction and nonfiction, including the novels The Autumn of the Patriarch and Love in the Time of Cholera, and the autobiography Living to Tell the Tale. There has been resounding acclaim for his life's work since he passed away in April 2014.

“One Hundred Years of Solitude is the first piece of literature since the Book of Genesis that should be required reading for the entire human race. It takes up not long after Genesis left off and carries through to the air age, reporting on everything that happened in between with more lucidity, wit, wisdom, and poetry that is expected from 100 years of novelists, let alone one man. . . . Mr. García Márquez has done nothing less than to create in the reader a sense of all that is profound, meaningful, and meaningless in life.” — William Kennedy, New York Times Book Review

“At 50 years old, García Márquez's masterpiece is as important as ever. . . To experience a towering work like One Hundred Years of Solitude is to be reminded of the humility we should all feel when trying to assert what is true and what is false.” — LitHub

"An irresistible work of storytelling, mixing the magic of the fairy tale, the realistic detail of the domestic novel and the breadth of the family saga.” — New York Times

“One Hundred Years of Solitude is substantive and substantial, and its prose precise for the simple reason that its sentences are too exquisite to be inessential. It is a novel on which is bestowed the laurels usually awarded to great works of frugal prose. Yet its genius is in the operatic telling.” — The Independent

“One Hundred Years of Solitude offers plenty of reflections on loneliness and the passing of time. It can also be seen as a caustic commentary on the evils of war, or a warm appreciation of familial bonds. García Márquez has urgent things to say that still feel close to home, 50 years after the book was first published.” — The Guardian

“One of the seminal works of 20th century Latin American fiction, it is a classic.” — Variety

“Fecund, savage, irresistible. . . . In all their loves, madness, and wars, their alliances, compromises, dreams and deaths...the characters rear up large and rippling with life against the green pressure of nature itself.” — Paul West, Book World