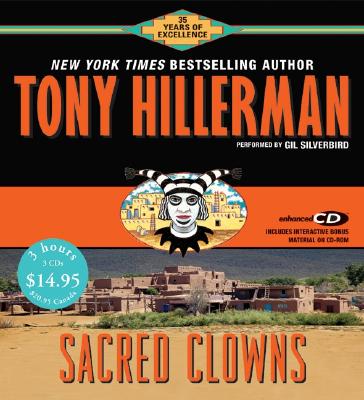 By Tony Hillerman, Gil Silverbird (Read by)
This title is hard to find, please call the store for our current availability.

During a kachina ceremony at the Tano Pueblo, the antics of a dancing koshare fill the air with tension. Moments later, the clown is found bludgeoned to death, in the same manner a reservation schoolteacher was killed only days before.

Officer Jim Chee and Lieutenant Joe Leaphorn believe that answers lie in the sacred clown's final cryptic message to the Tano people. But to decipher it, the two Navajo policemen may have to delve into closely guarded tribal secrets -- on a sinister trail of blood that links a runaway, a holy artifact, corrupt Indian traders, and a pair of dead bodies.

Enhanced CD: CD features an interactive program which can be viewed on your computer, including: a photo galary, an author Q&A and a 35 years of excellence timeline.