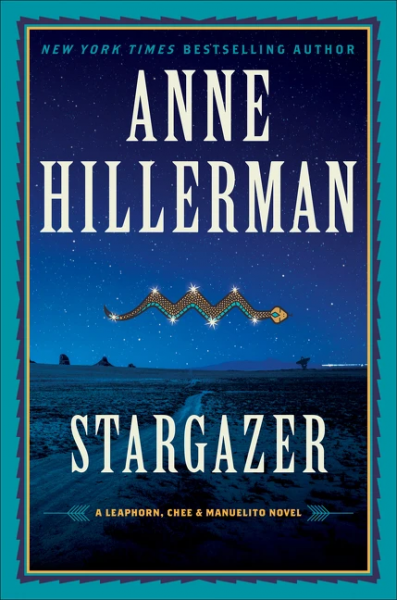 Join us for an online reading and discussion with Anne Hillerman with her new mystery novel Stargazer.

About the Book Stargazer

What begins as a typical day for Officer Bernadette Manuelito—serving a bench warrant, dealing with a herd of cattle obstructing traffic, and stumbling across a crime scene—takes an unexpected twist when she’s called to help find an old friend. Years ago, Bernie and Maya were roommates, but time and Maya’s struggles with addiction drove them apart. Now Maya’s brother asks Bernie to find out what happened to his sister.

Tracing Maya’s whereabouts, Bernie learns that her old friend had confessed to the murder of her estranged husband, a prominent astronomer. But the details don’t align. Suspicious, Bernie takes a closer look at the case only to find that nothing is as it seems. Uncovering new information about the astronomer’s work leads Bernie to a remote spot on the Navajo Nation and a calculating killer.

The investigation causes an unexpected rift with her husband and new acting boss, Jim Chee, who’s sure Bernie’s headed for trouble. While she’s caught between present and past, Chee is at a crossroads of his own. Burdened with new responsibilities he didn’t ask for and doesn’t want, he must decide what the future holds for him and act accordingly.

Can their mentor Joe Leaphorn—a man also looking at the past for answers to the future—provide the guidance both Bernie and Chee need? And will the Navajo heroes that stud the starry sky help them find justice—and the truth they seek?

“Hillerman’s writing becomes stronger with every new installment in the series, deepening the development of each character. Fans will be intrigued by the intertwining stories that keep them guessing. The picturesque Southwest, as well as the history of the Navajo, come through on each page.”
-Library Journal (starred review)

Author Anne Hillerman continues the Navajo detective stories her father Tony Hillerman made popular. Her debut novel, Spider Woman’s Daughter, received the Western Writers Spur Award as best first novel. That book and the four novels that followed were all New York Times best sellers. Her sixth mystery, Stargazer, is due for publication in 2021. When she’s not working, Anne likes to read, cook, ski and travel. She lives in Santa Fe with frequent trips to the Navajo Nation.